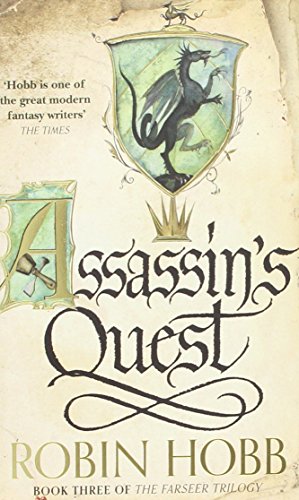 The gripping finale to Robin Hobb's classic Farseer trilogy. Keystone. Gate. Crossroads. Catalyst. Fitz is about to discover the truth about the Fool's prophecy. Having been resurrected from his fatal tortures in Regal's dungeons, Fitz has once more foiled Regal's attempts to be rid of him. Now, back in his own body, and after months of rehabilitation, Fitz begins the painful and slow process of learning the ways of a man again. Under the watchful eye of Burrich, old King Shrewd's Stablemaster, Fitz must learn to cast off the wild but carefree ways of the wolf and enter once more the human world: a world beset ever more viciously by the relentless Red Ship Raiders who are now left free to plunder any coastal town they please. But more immediately, a world in which he finds he is utterly alone. Regal has stripped the kingdom of its riches and retired to the inland city of Tradeford. Of Verity, on his quest to find the legendary Elderings, there has been no word; Molly, Kettricken and the Fool have all vanished. Unless Fitz can find Verity and help him in his quest, the Six Duchies will perish and there will be no safe place to live.

"With shimmering language and the alluring garb of Faerie, Hobb concludes her Farseer trilogy with this immense coming-of-age novel."--Publishers Weekly

From an extraordinary new voice in fantasy comes the stunning conclusion to the Farseer trilogy, as FitzChivalry confronts his destiny as the catalyst who holds the fate of the kingdom of the Six Duchies...and the world itself.
King Shrewd is dead at the hands of his son Regal. As is Fitz--or so his enemies and friends believe. But with the help of his allies and his beast magic, he emerges from the grave, deeply scarred in body and soul. The kingdom also teeters toward ruin: Regal has plundered and abandoned the capital, while the rightful heir, Prince Verity, is lost to his mad quest--perhaps to death. Only Verity's return--or the heir his princess carries--can save the Six Duchies.
But Fitz will not wait. Driven by loss and bitter memories, he undertakes a quest: to kill Regal. The journey casts him into deep waters, as he discovers wild currents of magic within him--currents that will either drown him or make him something more than he was....