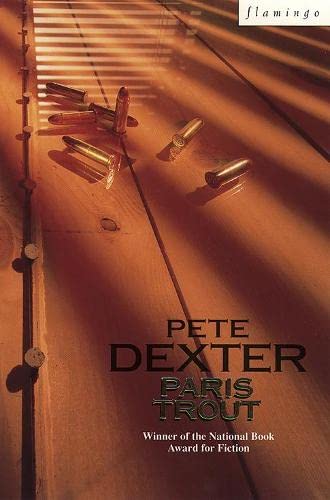 A gothic tale of murder, injustice, and mayhem in a small Georgia town at the end of WW II, by the hypnotically gifted author of God's Pocket (1983) and Deadwood (1986). Paris Trout - a disheveled, miserly, eccentric, and amoral but nonetheless locally respectable hardware-store owner and loan shark - is the murderer; his victim is a 14-year-old black girl named Rosie Sayers, whom he kills in a shooting spree brought on by a black boy's failure to repay a loan. Much against the will of the comfortable Southern town, Trout's trial is a fair one, and he's sentenced to prison; but Trout is smart, wily, and resolute with a mad determination not to pay for something he doesn't consider to have been a crime - with the result that he bribes and blackmails his way out of jail, returning to the town as a living irritant to its inhabitants' consciences. But Trout grows madder: and, finally, urine-stained and utterly deluded. With a conviction that his estranged wife - a wonderful, stoical character by the name of Hannah Trout - is poisoning him, Trout holes up in the county courthouse during the town's sesquicentennial celebration and, having shot his stroke-ridden mother in the head ("I end my connections with everything that come before"), opens fire on the rest of his enemies: his lawyer, Harry Seagraves; his wife's divorce lawyer ("the youngest Eagle Scout in the history of the state"), and other local noteworthies and respectables. Once again, Dexter shows a mesmerizing mastery of character development, pace and tone; Cotton Point, Ga., lives and breathes, and Paris Trout menaces us and he menaces it. The larger message - that racism is a form of madness that overspills its boundaries - is murky; but this is nonetheless a fascinating read. (Kirkus Reviews)

In this novel of social drama, a casual murder in the small Georgia town of Cotton Point just after World War II and the resulting court case cleave open the ugly divisions of race and class. The man accused of shooting a black girl, a storekeeper named Paris Trout, has no great feeling of guilt, nor fear that the system will fail to work his way. Trout becomes an embarrassment to the polite white society that prefers to hold itself high above such primitive prejudice. But the trial does not allow any hiding from the stark reality of social and racial tensions. Dexter, a former newspaper columnist, is also the author of Deadwood and God's Pocket. Paris Trout won the 1988 National Book Award.

Pete Dexter is the author of the National Book Award–winning novel Paris Trout as well as Spooner, Paper Trails, God’s Pocket, Deadwood, Brotherly Love, and Train. He has been a columnist for the Philadelphia Daily News and the Sacramento Bee, and has contributed to many magazines, including Esquire, Sports Illustrated, and Playboy. His screenplays include Rush and Mulholland Falls. Dexter was born in Michigan and raised in Georgia, Illinois, and eastern South Dakota. He lives on an island off the coast of Washington.

Shipping: US$ 5.31
From United Kingdom to U.S.A.
Destination, rates & speeds

Shipping: US$ 19.97
From United Kingdom to U.S.A.
Destination, rates & speeds