Items related to Daisy's Wars: A Compelling Story of One Woman's...

Henderson, Meg Daisy's Wars: A Compelling Story of One Woman's Battles, In War and Peace

Daisy's Wars: A Compelling Story of One Woman's Battles, In War and Peace 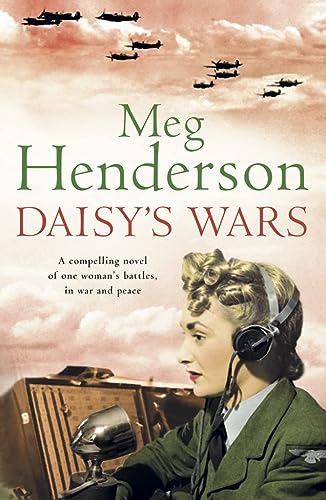 A young woman escapes her stifling home town to become a WAAF, little realising the life she will lead as World War Two breaks. Daisy grows up in a Geordie family of Irish descent, which has just one interest: her older sister, a precociously talented singer. Daisy learns early on how to cope with disappointment and rejection, but she also develops a rare resilience and determination. This stands her in good stead when a despicable act of violence gives her no choice but to leave home. The WAAFs want recruits and Daisy signs up, full of trepidation but hope too. Now she can be the person she's always wanted to be -- but who exactly is that? Through the dangers of the war, the raids, the heightened camaraderie, the emotional tension, Daisy comes to realise that she need not put up a front as a good-time girl or an ice queen. But by then, it's too late for the one pilot who almost broke through her reserve!

A Glasgow-born journalist, Meg Henderson is one of Scotland's best-loved novelists.

Praise for 'Daisy's Wars': 'This novel has it all -- humour amid the sadness, bravery, hope, love and the tragedy of young lives lived and lost during World War II' Aberdeen Press & Journal 'The author of "Second Sight", Meg Henderson is one of Scotland's bestselling novelists and here she presents us with another hugely absorbing story' Cork Evening Echo 'Henderson's evocation of women's wartime experiences is compelling' Glasgow Herald

1. Daisy's Wars: A Compelling Story of One Woman's Battles, In War and Peace [Paperback] Henderson, Meg