Items related to Voyage of the Dawn Treader (Chronicles of Narnia)

Voyage of the Dawn Treader (Chronicles of Narnia) 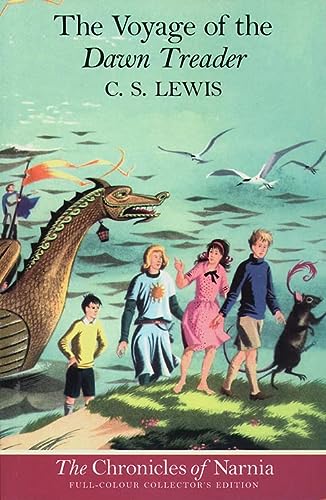 A full-colour paperback edition of The Voyage of the Dawn Treader, book five in the classic fantasy series, The Chronicles of Narnia. This edition is complete with full-colour cover and interior art by the original illustrator of Narnia, Pauline Baynes. A king and some unexpected companions embark on a voyage that will take them beyond all known lands. As they sail farther and farther from charted waters, they discover that their quest is more than they imagined and that the world's end is only the beginning. The Voyage of the Dawn Treader is the fifth book in C. S. Lewis's classic fantasy series, which has been drawing readers of all ages into a magical land with unforgettable characters for over sixty years. This is a novel that stands on its own, but if you would like to continue to the journey, read The Silver Chair, the sixth book in The Chronicles of Narnia.

The BBC Radio production of The Voyage of the Dawn Treader is a delightful two-hour sail on the most fabulous ship in Narnia. Lucy and Edmund, with their dreadful cousin Eustace, get magically pulled into a painting of a ship at sea. That ship is the Dawn Treader, and on board is Caspian, King of Narnia. He and his companions, including Reepicheep, the valiant warrior mouse, are searching for seven lost lords of Narnia, and their voyage will take them to the edge of the world. Their adventures include being captured by slave traders, a much-too-close encounter with a dragon, and visits to many enchanted islands, including the place where dreams come true. The adaptation is faithful to its source, C.S. Lewis's series of Narnia books, which have provided exciting and uplifting tales for generations of children. BBC Radio does wonders with sound effects--the ship creaks in the wind, the sorrowful dragon roars lugubriously--and musical cues and interludes that keep the pacing dynamic. There's also a splendid cast of plummy British voices, making this far more than a book read onto cassette--it's an audio drama, as enjoyable as a trip to the theater. Grownups who buy this tape for their children will want to borrow it for themselves. (Running time: two hours, two cassettes) --Blaise Selby

In the enchanted land of Narnia, Edmund and Lucy join King Caspian on a sworn mission to find the seven lost Lords of Narnia.  So begins a perilous new quest that takes them to the farthest edge of the Eastern world on board the mighty Dawn Treader.

Sailing uncharted seas, the old friends must survive a terrible storm, encounters with sea serpents, dragons, and invisible enemies to reach lands where magicians weave mysterious spells and nightmares come true.  They need every ounce of courage and the help of the great lion Aslan to triumph in their most hazardous adventure of all.

This acclaimed BBC Radio dramatization perfectly captures C.S. Lewis' magical world where once again the inhabitants of Narnia join with their human companions in the never ending battle between good and evil.  With a stellar cast, authentic sound effects and wonderfully stirring music, The Voyage of the Dawn Treader will warm and engage the hearts of children and adults alike.

1. The Voyage of the Dawn Treader (Paperback)

Book Description 1998. Paperback. Condition: New. New edition. Paperback. The Narnia Chronicles, first published in 1950, remain some of the most enduringly popular ever published. The Lion, the Witch and the Wardrobe, has been translated into 29 languages! The .Shipping may be from multiple locations in the US or from the UK, depending on stock availability. 192 pages. 0.420. Seller Inventory # 9780006716808

2. The Voyage of the "Dawn Treader" (Chronicles of Narnia)

3. The Voyage of the Dawn Treader (Paperback)

Book Description 1998. Paperback. Condition: New. New edition. Paperback. The Narnia Chronicles, first published in 1950, remain some of the most enduringly popular ever published. The Lion, the Witch and the Wardrobe, has been translated into 29 la.Shipping may be from our Sydney, NSW warehouse or from our UK or US warehouse, depending on stock availability. 192 pages. 0.420. Seller Inventory # 9780006716808

4. The Voyage of the 'Dawn Treader (Chronicles of Narnia) Lewis, C.S. and Baynes, Pauline