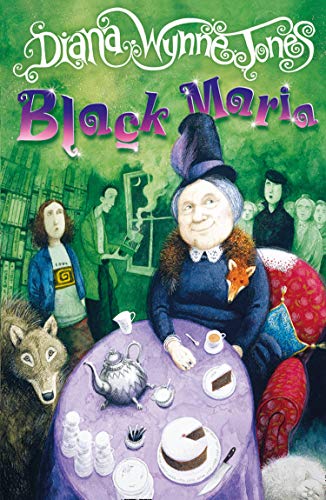 On the surface, Aunt Maria seems like a cuddly old lady, all chit-chat and lace doilies and unadulterated NICEness! When Mig and her family go for a short visit, they soon learn that Aunt Maria rules the place with a rod of sweetness that's tougher than iron and deadlier than poison. Life revolves around tea parties, while the men are all grey-suited zombies who fade into the background, and the other children seem like clones. The short visit becomes a long stay, and when all talk of going home ceases, Mig despairs! Things go from bad to worse when Mig's brother Chris tries to rebel, but is changed into a wolf . Mig is convinced that Aunt Maria must be a witch -- but who will believe her? It's up to Mig to figure out what's going on. Maybe the ghost who haunts the downstairs bedroom holds the key?

Diana Wynne Jones spent her childhood in Essex and has been writing fantasy novels for children since 1973. With her unique combination of magic, humour and imagination, she has been enthralling children and adults with her work ever since. She won the Guardian Award in 1977 with Charmed Life, was runner-up for the Children's Book Award in 1981, and was twice runner-up for the Carnegie Medal. She is married with three sons, and lives in Bristol with her husband.

"...Her hallmarks include laugh-aloud humour, plenty of magic and imaginative array of alternate worlds. Yet, at the same time, a great seriousness is present in all of her novels, a sense of urgency that links Jones's most outrageous plots to her readers' hopes and fears..."Publishers Weekly

Shipping: US$ 23.43
From United Kingdom to U.S.A.
Destination, rates & speeds