Items related to From Dawn to Decadence : 500 Years of Western Cultural...

From Dawn to Decadence : 500 Years of Western Cultural Life 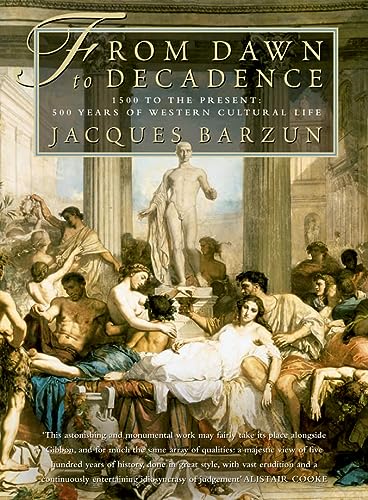 The bestselling (New York Times No. 3) history chronicling half a millennium of Western culture. From Dawn To Decadence is the French-American historian Jacques Barzun's great opus. It is the product of a lifetime of separate studies which he now sets down in one powerful narrative, interspersing his entertaining analysis of wars, philosophy, science, manners, sex, religion, morals, art, et al, from the Reformation to the present day, with biographical sketches of influential historical figures (including Luther, Charles V, Descartes, Bacon, Machiavelli, Shakespeare, Cromwell, Peter the Great, Defoe, Swift, Rubens, Bach, Byron, Pascal, Florence Nightingale, James Joyce!) His positive conclusion is that the decadence of the current age is merely a watershed for a new age in which Western culture will again flourish. This is heavyweight history written with great wit and verve, comparable in scope with the Big Ideas and Big Themes history of Paul Kennedy's Rise and Fall of the Great Powers, which was a huge bestseller that was first 'made' in the US, and Paul Johnson (The Birth of the Modern; Intellectuals; Twentieth Century Britain). With Barzun's lucid and easy style it is also a very accesible book which will be eagerly devoured by history and culture lovers alike.

In the last half-millennium, as the noted cultural critic and historian Jacques Barzun observes, great revolutions have swept the Western world. Each has brought profound change--for instance, the remaking of the commercial and social worlds wrought by the rise of Protestantism and by the decline of hereditary monarchies. And each, Barzun hints, is too little studied or appreciated today, in a time he does not hesitate to label as decadent.

To leaf through Barzun's sweeping, densely detailed but lightly written survey of the last 500 years is to ride a whirlwind of world-changing events. Barzun ponders, for instance, the tumultuous political climate of Renaissance Italy, which yielded mayhem and chaos, but also the work of Michelangelo and Leonardo--and, he adds, the scientific foundations for today's consumer culture of boom boxes and rollerblades. He considers the 16th-century varieties of religious experimentation that arose in the wake of Martin Luther's 95 theses, some of which led to the repression of individual personality, others of which might easily have come from the "Me Decade." Along the way, he offers a miniature history of the detective novel, defends Surrealism from its detractors, and derides the rise of professional sports, packing in a wealth of learned and often barbed asides.

Never shy of controversy, Barzun writes from a generally conservative position; he insists on the importance of moral values, celebrates the historical contributions of Christopher Columbus, and twits the academic practitioners of political correctness. Whether accepting of those views or not, even the most casual reader will find much that is new or little-explored in this attractive venture into cultural history. --Gregory McNamee

Jacques Barzun was born in France in 1907 and moved to the US in 1920. After graduating from Columbia University he joined its faculty as Professor of History, becoming Dean of Faculties and Provost. The author of over thirty books he received the Gold Medal for Criticism from the American Academy of Arts and Letters, of which he was twice president.

From Dawn to Decadence: 500 Years of Western Cultural Life

Book Description Paperback. Condition: Used; Good. Dispatched, from the UK, within 48 hours of ordering. This book is in good condition but will show signs of previous ownership. Please expect some creasing to the spine and/or minor damage to the cover. Damaged cover. The cover of is slightly damaged for instance a torn or bent corner. Grubby book may have mild dirt or some staining, mostly on the edges of pages. Seller Inventory # CHL8080378

Shipping: US$ 4.58
From United Kingdom to U.S.A.
Destination, rates & speeds

From Dawn to Decadence: 500 Years of Western Cultural Life

Book Description Paperback. Condition: Very Good. The book has been read, but is in excellent condition. Pages are intact and not marred by notes or highlighting. The spine remains undamaged. Seller Inventory # GOR002803002

Shipping: US$ 16.03
From United Kingdom to U.S.A.
Destination, rates & speeds

From Dawn to Decadence. 1500 to the Present: 500 Years of Western Cultural Life.

Shipping: US$ 9.16
From United Kingdom to U.S.A.
Destination, rates & speeds

From Dawn to Decadence. 1500 years to the Present: 500 years of Western Cultural Life

Shipping: US$ 17.12
From United Kingdom to U.S.A.
Destination, rates & speeds