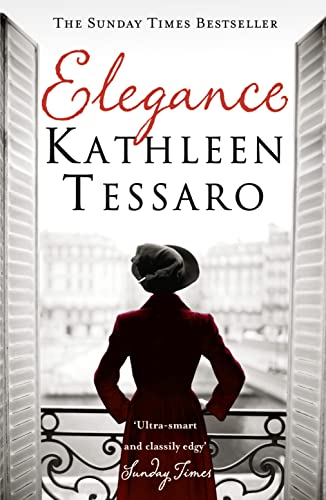 A crisp clean softcover, no markings throughout:\nThis finely wrought debut novel tells a Cinderella story of sorts about an unhappy thirtysomething woman who manages to turn her disastrous life around. Louise Canova hails from Pittsburgh but is currently living in London with her actor husband. Louise has severe self-esteem problems, a budding eating disorder, a complete lack of interest in any activity, and a growing sense that something isn't right with her marriage. One day, while browsing in a used bookstore, she comes across a style manual entitled Elegance, penned by a doyenne of Parisian style and grace. Captivated by the advice in the book, Louise begins to dress better (no more Birkenstocks and shapeless dresses), work out regularly, and sleep less, and she seeks more attention and respect from her husband. Tessaro is a skillful writer, and in her capable hands this subject receives the respect it deserves, with dark undertones from Louise's past rearing up unexpectedly throughout the story. Readers will enjoy following this harrowing journey of self-discovery, renewal, and reinvention to its uplifting conclusion.

Born in Pittsburgh, Kathleen Tessaro studied drama before emigrating to London. After ten years working as an actress in films, television, and theatre, she left the profession and spent several years working for the English National Opera, while training in the evenings as a drama teacher and voice coach. During this time, she began to write. Working on short stories during her lunch hour, she soon became a regular member of the Wimpole Street Writers Workshop, a collection of women authors who meet every week. She is married and lives in North London. Elegance is her first novel.

A frumpy, depressed woman is reborn as an assertive diva in Tessaro's debut novel, thanks to a 40-year-old style manual she discovers in a second-hand bookstore. Louise Canova is an American woman from Pittsburgh who lives in London with her chilly actor husband. Louise once dabbled in acting herself, but now works at a theater box office. She's overweight, badly dressed, has purely platonic relations with her husband and is surrounded by more-glamorous-than-thou types-her friend Nicki, a former model; her mother-in-law, a former model and a socialite-who condescend to her. Everything changes, however, when Louise discovers Elegance, a fashion guide from 1964 written by Genevieve Dariaux, a legendary (and fictional) Coco Chanel-like arbiter of taste. Quoting liberally from the guidebook, Tessaro writes a lighthearted contemporary version of Pygmalion. In this case, Louise is her own Professor Higgins, and using Dariaux's amusingly anachronistic (is anyone wearing veils these days?) yet timeless advice ("being beautiful is no guarantee of happiness in this world"), she changes her appearance, her self-image and her entire life. The author introduces each chapter with a relevant excerpt from the manual. This structure sometimes seems a bit forced, especially when Louise's husband turns out to be gay (there is no worthwhile advice from Madam Dariaux on that situation), but on the whole the book is a lively, irresistible read.
Copyright 2003 Reed Business Information, Inc.