Items related to News From Paraguay 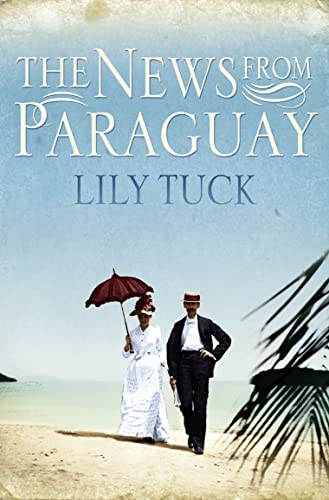 Born in Paris, LILY TUCK is the author of four previous novels: Interviewing Matisse, or the Woman Who Died Standing Up; The Woman Who Walked on Water; Siam, or the Woman Who Shot a Man, which was nominated for the 2000 PEN/Faulkner Award for Fiction; and The News from Paraguay, winner of theNational Book Award. She is also the author of the biography Woman of Rome: A Life of Elsa Morante. Her short stories have appeared in The New Yorker and are collected in Limbo and Other Places I Have Lived. Lily Tuck divides her time between Maine and New York City.

In 1864, the landlocked country of Paraguay went to war against three of its neighbors at once. Reports from the troops of Brazil, Argentina and Uruguay (then known as the Banda Oriental) described the hopelessly outnumbered Paraguayan soldiers as ferocious and stubborn and loyal to their flamboyant ruler, Francisco Solano Lopez, even as they died in heaps.

Lopez's cause was as obscure as it was doomed, involving mostly his outsized ego and delusions of adequacy. The War of the Triple Alliance nonetheless lasted five years, destroyed Paraguay's meager economy and killed more than half the male population, including Lopez. His Irish mistress, Ella Lynch, however, survived.

The story of Ella and the dictator she called Franco has the stuff of high drama. Lily Tuck opens her pointillist novel about them in Paris of 1854, where a blue feather falling from Ella's hat entrances Franco as they ride in the Bois de Boulogne. Through small and disconnected set pieces of journal entries, letters, conversations and little incidents, we grasp that Franco is the playboy son of Paraguay's current caudillo and Ella is a lovely young courtesan making her nimble way from bed to bed in French high society.

Tuck's style in these early pages is as effective and swift as in her earlier and most successful novel, Siam. By page 30, our two unsentimental opportunists are together in South America, and Ella is pregnant. Many images are so vivid you can almost smell them: the abattoirs of Buenos Aires, where cattle are killed only for their hides and the flayed carcasses are left to rot in the street; the whirring clouds of birds and teeming jungle flora on the couple's trip upriver to Asuncion; the broken arm that hurts, festers and finally kills Ella's young maidservant.

But one keeps waiting for the moment when Ella will become an appealing human being, or when Franco will reveal the charisma he must have had, or when his sisters will emerge from their fat-slob stereotypes to become real people. Instead they stay remote and rather hard-edged, never engaging our emotions. The episodic style achieves many lovely moments but becomes tiresome as it introduces and then discards dozens of people who could be memorable. These include assorted diplomats, soldiers, relatives and Franco's adversaries, the legendary Brazilian Emperor Don Pedro and the Argentine Gen. Bartoleme Mitre, leaving each so unexplored and fleeting that they all become nearly interchangeable. One keeps flipping back to see who these characters are exactly, wondering if perhaps this colonel or that landowner will prove central to the story. They don't -- or rather, they are all equally relevant, evidently brought in because of their historical role in what actually happened.

That is unfortunate. It is a rule of serious fiction that there's no excuse for putting something in a novel just because it really happened. The sheer sprawl of Tuck's subject matter seems to have overwhelmed her; she has put it all into her story without focus, rather than pruning away the undergrowth to showcase the two lovers or to illumine the history they created. At the end nothing seems to have led to anything else, the myriad challenges and privations of war simply happen without transforming the characters' understanding, and key events transpire without context -- the war seems to have started and ended on its own. We emerge with neither a grasp of the historical period nor any feeling for its shapers, real or fictional.

"Of course there was an Ella Lynch who was beautiful and misguided, there was a Francisco Solano Lopez who was cruel and ambitious," Tuck says in her author's note at the end of the book. "The need to explain and the need to dramatize are often at odds. What, then, the reader may wonder, is fact and what is fiction? My general rule of thumb is whatever seems most improbable is probably true."

Perhaps this frustrating approach is meant to evoke the disjointed nature of human experience, the measuring out of lives in coffee spoons, the inadequacy of memory, the sheer coquetry of chance and life and death, etc. If so, it is certainly just as frustrating as real life can be -- for example, when one is hoping to sit down with a vivid story and learn a little something about how to be a full human being while yet surviving during violent and turbulent times.