Items related to The Stranger House 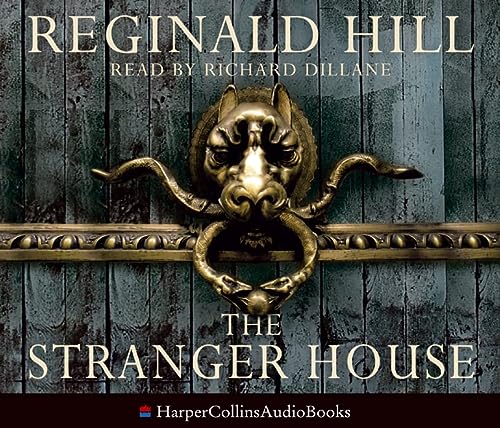 The stunning new standalone psychological thriller, set in Cumbria, past and present, from Reginald Hill, one of the UK's most popular and admired crime novelists Things move slowly in the village of Illthwaite, but that's about to change with the arrival of two strangers intent on digging up bits of the past the locals would rather keep buried. Sam Flood is a young Australian mathematician whose grandmother was despatched from Illthwaite four decades ago, courtesy of the Child Migrant scheme. Miguel Madero, Sam's fellow guest at the Stranger House inn, is a Spanish wannabe-priest-turned-historian in pursuit of an ancestor last seen setting sail with the Armada in 1588. The antipathy between them is instant and mutual, but as they follow their separate quests their paths become increasingly entangled, with clashes physical and metaphysical, and shocks natural and supernatural, as the tension mounts to an explosive climax. All the elements we have come to expect from Reginald Hill's writing -- mystery, humour, elegant style, intricate plotting, fascinating characters, and a strong sense of history -- combine here to create what must be his finest novel yet.

Reginald Hill was brought up in Cumbria, and has returned there after many years in Yorkshire. With his first crime novel, A Clubbable Woman, he was hailed as 'the crime novel's best hope' and twenty years on he has more than fulfilled that prophecy.

On July 8th, 1992, a small girl woke up in her bed in her family house in the Australian state of Victoria and knew exactly who she was.

Samantha Flood, known to her friends as Sam and her family as Sammy, only child of Sam and Louisa Flood, granddaughter of Vince and Ada Flood, who between them had turned a patch of scrubby farmland on the fringe of the Goulburn Valley into the Vinada Winery which by the end of the eighties was winning golden opinions and medals to match at wine shows up to and including the Royal National Capital.

Today she was eleven years old and she was bleeding.

The bleeding was a shock. Not because Sam didn’t know what it was. Her ma had explained it all years back, and she’d been taught stuff at school, and the lesson had been complete when her best friend, Martie Hopkins, started not long after she turned ten.

Ten was early. Martie was proud of being the first in their class, just like she was proud of the rest that came early too, the boobs and the bush. Sam was a skinny little thing, not just flat but practically concave. Martie, complacent in her new roundness, once joked in the school showers that you could serve soup on Sam’s chest. Sam retorted that at least she wasn’t a fat-arse, but secretly she envied Martie. They were always competing for top of the class and neither cared to see the other ahead in anything.

So the bleeding wasn’t altogether unwelcome, but on her birthday it seemed lousy timing.

She called to her mother, who came into the bedroom and soon put things right, both inside and out. Lu Flood had a great talent for putting things right. As she sorted her daughter out, she remarked that some of my people reckoned it was lucky to start on your birthday. Lu had worked out she was one-seventh Aboriginal and there weren’t many situations she hadn’t got a bit of my people wisdom for. Her husband just grinned and said she made most of it up, while Sam, who loved playing around with numbers, worked out you couldn’t be one-seventh something anyway, you had to be half or a quarter or an eighth, because everyone had two parents and four grandparents and so on.

It made no difference to Lu. One-seventh she was, which was a good proportion, seven being a lucky number, and Sam was one-fourteenth, which was twice as lucky.

Maths apart, Sam quite liked all this weird stuff her mother spouted about my people. It made her feel connected with that great emptiness outside her bedroom window. And if it got scary, which it did sometimes, the one-seventh (or one-fourteenth) weirdness was more than balanced by the comfort­ able certainties she got from her father’s side of the family.

She used to stagger to Gramma Ada with her great heavy leather-bound photo album and ask to be told about the folk whose faces stared out at her. She liked it best when they got to the old sepia photos where the men had beards or heavy moustaches and the women wore long dresses and everyone looked like they’d been shot and taken to a taxidermist. Gramma knew all their names, all their stories.

With history like this, Sam knew for certain who she was, so it didn’t matter when Ma’s stories got a bit frightening, there was nothing in them that those old sepia men with their big moustaches and unblinking stares couldn’t deal with.

That morning as Lu cleaned Sam up, she recalled that up north where my people came from, when a girl started bleeding, she had to live by herself for a month or so, lying face-down in a hut so she couldn’t see the sun, because if she did, her nose would go rotten.

“So there you are, Sam,” she said when she’d finished. “Your choice. You can either head out to the old brewhouse and lie flat for a few weeks, or you can take your chances, come downstairs and open your prezzies.”

So, no choice. And no change except that Sam was eleven and on a level with Martie.
She had a great day, ate as much chocolate as she liked, which was a hell of a lot, and got to stay up late, watching the telly.

There was only one thing to watch, which was a play everyone had been talking about called The Leaving of Liverpool. Sam would have preferred something that had promise of a bit more life in it, but her mother and Gramma Ada wanted to see the play, so that’s what they settled down to. Except for her pa. He said he had to check some new vines. If it wasn’t cricket or Aussie footie, Pa didn’t give a toss for television.

The play (as Sam explained it later to her friends) was about a bunch of English kids who got sent to Australia because they were orphans or at least their parents didn’t want them and there was some scheme here to look after them and see they got a proper education. Except it didn’t work out like that. They got treated rotten. Worse than rotten in some cases. They got treated like slaves.

It was late when Sam went up to bed but she couldn’t sleep. She lay there thinking about the play, and it all got mixed up with the bleeding somehow, and for the first time ever she had a sense of herself as something separate from her context.

Up till now she’d been Samantha Flood who lived with her ma and her gramma at the winery run by her pa and they all loved her. She went to school, she had a lot of friends, she wasn’t all that pretty but everyone said she had the loveliest red hair they’d ever seen. And she was really bright, particularly at sums. There was no place further away than Melbourne, no time longer than the months between now and Christmas, nothing sadder in recent years than the death of her kitten, Tommo, who got run over by one of the big drays, and nothing surer than that if anyone was going to live happy ever after with nothing much changing, that person was little Sam Flood.

That was Sam on the inside looking out. That night, the night of her eleventh birthday, for the very first time she found herself on the outside looking in.
From the Hardcover edition.