Items related to The Fellowship of the Ring: Being the First Part of...

The Fellowship of the Ring: Being the First Part of the Lord of the Rings. by J.R.R. Tolkien (Pt. 1) 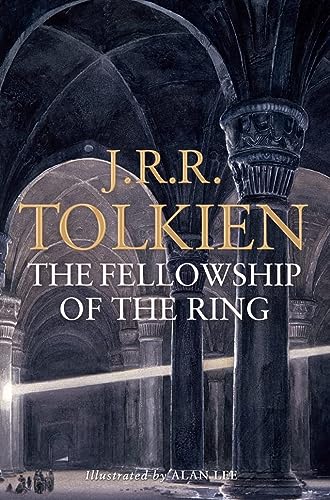 The first volume in J.R.R. Tolkien's epic adventure The Lord of the Rings
One Ring to rule them all, One Ring to find them, One Ring to bring them all and in the darkness bind them
In ancient times the Rings of Power were crafted by the Elven-smiths, and Sauron, the Dark Lord, forged the One Ring, filling it with his own power so that he could rule all others. But the One Ring was taken from him, and though he sought it throughout Middle-earth, it remained lost to him. After many ages it fell into the hands of Bilbo Baggins, as told in The Hobbit. In a sleepy village in the Shire, young Frodo Baggins finds himself faced with an immense task, as his elderly cousin Bilbo entrusts the Ring to his care. Frodo must leave his home and make a perilous journey across Middle-earth to the Cracks of Doom, there to destroy the Ring and foil the Dark Lord in his evil purpose.
A unique, wholly realized other world, evoked from deep in the well of Time, massively detailed, absorbingly entertaining, profound in meaning. New York Times
J.R.R. TOLKIEN (1892 1973) is the creator of Middle-earth and author of such classic and extraordinary works of fiction as The Hobbit, The Lord of the Rings, and The Silmarillion. His books have been translated into more than fifty languages and have sold many millions of copies worldwide.
www.lordoftheringstrilogy.com

" From the Inside Flap:

Frodo Baggins knew the Ringwraiths were searching for him--and the Ring of Power he bore that would enable Sauran to destroy all that was good in Middle-earth. Now it was up to Frodo and his faithful servant Sam to carry the Ring to where it could be detroyed--in the very center of Sauron's dark kingdom.

2. The Fellowship Of The Ring [Paperback] Tolkien, J.R.R.