Items related to Whatever it Takes: The Real Story of Gordon Brown and...

Richards, Steve Whatever it Takes: The Real Story of Gordon Brown and New Labour

Whatever it Takes: The Real Story of Gordon Brown and New Labour 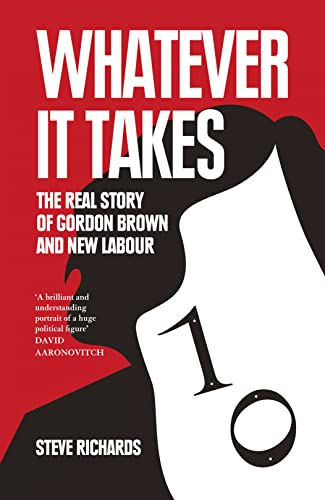 The definitive account of New Labour's rise and fall.

On 11 May 2010 Gordon Brown resigned as Prime Minister; it marked the end of thirteen dramatic years of Labour government. When he finally released his grip on power, many questions remained about the most intriguing and complex political figure of modern times and co-architect of New Labour. Leading commentator Steve Richards watched every step of the stormy political journey from 1992, when Brown became shadow chancellor, to the day he left Number Ten, and narrates it here for the first time.

Steve Richards has gained access to all levels of Westminster to explain this complex party and its leadership, reflecting on the outcome of the 2010 general election and what the fall of New Labour means for our nation’s political future.

Steve Richards has been chief political commentator at the Independent since 2000, before which he was a BBC political correspondent and political editor of the New Statesman. He has also written for the Guardian, Observer, Evening Standard and the TLS. He presented Despatch Box on BBC 2 and The Sunday Programme on GMTV. He currently presents Week in Westminster on Radio 4 and is a regular guest on the Today programme, Newsnight and Question Time. In September he will be writing and presenting a major series on Gordon Brown for BBC Radio 4. He was named political journalist of the year in 2009 by the Political Studies Association.

Under New Labour there were two governments: one official, one largely hidden. The other government belonged to Gordon Brown. Now Steve Richards has created a unique biography of that administration - and a brilliant and understanding portrait of a huge political figure, his personal weaknesses and immense strengths. In so doing Richards, easily one of our best commentators, uncovers the unfashionable truth that politics sometimes matters as much as personalities.DAVID AARONOVITCHThis book has been a long time coming, but it's well worth the wait. Steve Richards is quite simply one of the best in the business. His mix of criticism and compassion has produced the most intelligent take yet on the strange world of Gordon Brown and New Labour.JOHN KAMPFNER

2. Whatever it Takes: The Real Story of Gordon Brown and New Labour

3. Whatever it Takes: The Real Story of Gordon Brown and New Labour

4. Whatever It Takes: The Inside Story Of Gordon Brown And New Labour