Items related to Unbroken: An Extraordinary True Story of Courage and... 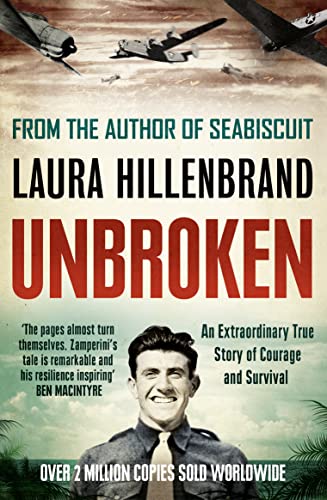 Product Description The new book from the author of the bestselling and much-loved Seabiscuit. On a May afternoon in 1943, a bomber crashed into the Pacific Ocean and disappeared, leaving only a spray of debris and a slick of oil, gasoline and blood. Then, on the ocean surface, a face appeared. It was that of a young lieutenant, who struggled to a life raft and pulled himself aboard. So began one of the most extraordinary odysseys of the Second World War. The lieutenant's name was Louis Zamperini. In boyhood, he'd been an incorrigible delinquent, breaking into houses, brawling, and fleeing his home to ride the rails. As a teenager, he had channelled his defiance into running, discovering a prodigious talent that had carried him to the Berlin Olympics and within sight of the four-minute mile. But when war had come, the athlete had become an airman, embarking on a journey that led to his doomed flight, a tiny raft, and adrift into the unknown. Ahead of Zamperini lay thousands of miles of open ocean, leaping sharks, a foundering raft, thirst and starvation, enemy aircraft, and, beyond, a trial even greater. Driven to the limits of endurance, Zamperini would answer desperation with ingenuity; suffering with hope, resolve, and humour; brutality with rebellion. His fate, whether triumph or tragedy, would be suspended on the fraying wire of his will. The long-awaited new book from Laura Hillenbrand, 'Unbroken' is a gripping account of human endurance and the resilience of one remarkable individual.

Review:
Amazon Best Books of the Month, November 2010: From Laura Hillenbrand, the bestselling author of Seabiscuit, comes Unbroken, the inspiring true story of a man who lived through a series of catastrophes almost too incredible to be believed. In evocative, immediate descriptions, Hillenbrand unfurls the story of Louie Zamperini--a juvenile delinquent-turned-Olympic runner-turned-Army hero. During a routine search mission over the Pacific, Louie’s plane crashed into the ocean, and what happened to him over the next three years of his life is a story that will keep you glued to the pages, eagerly awaiting the next turn in the story and fearing it at the same time. You’ll cheer for the man who somehow maintained his selfhood and humanity despite the monumental degradations he suffered, and you’ll want to share this book with everyone you know. --Juliet Disparte

About the Author:
Laura Hillenbrand is the author of the number one bestsellers Unbroken and Seabiscuit, which won the William Hill Sports Book of the Year and was a finalist for the National Book Critics Circle Award. The film it inspired was nominated for seven Academy Awards, including Best Picture. She served as a consultant on the Universal Pictures feature film based on Unbroken. Hillenbrand's New Yorker article, `A Sudden Illness', won the 2004 National Magazine Award, and she is a two-time winner of the Eclipse Award. She and actor Gary Sinise co-founded Operation International Children, a charity that provided school supplies to children through American troops. She lives in Washington, D.C.

Unbroken: An Extraordinary True Story of Courage and Survival Paperback

Book Description Paperback. Condition: New. 4th. Ed. Language: English. Brand new Book. The incredible true story of Louis Zamperini, now a major motion picture directed by Angelina Jolie. THE INTERNATIONAL NUMBER ONE BESTSELLER In 1943 a bomber crashes into the Pacific Ocean. Against all odds, one young lieutenant survives. Louise Zamperini had already transformed himself from child delinquent to prodigious athlete, running in the Berlin Olympics. Now he must embark on one of the Second World War's most extraordinary odysseys. Zamperini faces thousands of miles of open ocean on a failing raft. Beyond like only greater trials, in Japan's prisoner-of-war camps. Driven to the limits of endurance, Zamperini's destiny, whether triumph or tragedy, depends on the strength of his will . Now a major motion picture, directed by Angelina Jolie and starring Jack O' Connell. Seller Inventory # AAZ9780007378036