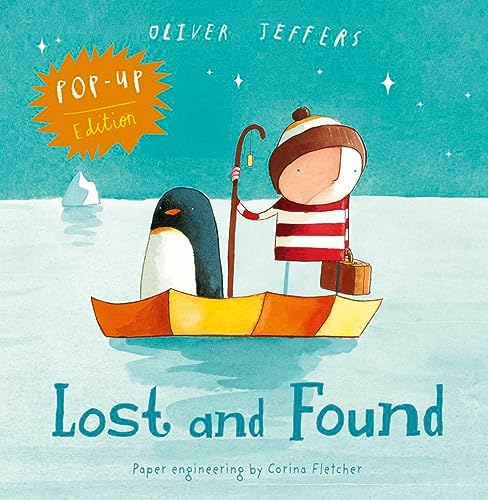 See the boy and the penguin dramatically spring to life in this fantastic pop-up edition of the award-winning, best-selling picture book Lost and Found, by the internationally renowned author/illustrator Oliver Jeffers. There once was a boy! one day a penguin arrived on his doorstep. The boy decided the penguin must be lost and tried to return him. But no one seemed to be missing a penguin. So the boy decided to take the penguin back to the South Pole himself, and they set out in his row boat on a journey across the oceans. But when they geo there, the boy discovered that maybe home wasn't what the penguin was looking for after all!

Oliver Jeffers graduated from The University of Ulster in 2001 with First Class honours. His outstanding talent has been recognised by several high-profile awards, including the Nestle Children's Book Prize Gold Award. `Lost and Found' animation was broadcast on Channel 4. Oliver lives and works in Brookyln, New York.

PreSchool-Grade 2–Once there was a boy who found a penguin at his door. From this opening line to the very end, this gentle story of friendship will capture young readers' imaginations. The child assumes that the penguin is lost, which is logical since the lumpy black-and-white bird does look awfully forlorn. Determined to help the creature find its way home, he discovers that penguins come from the South Pole, and the two board a rowboat. During their long sea voyage, the youngster passes the time by telling his companion many stories. However, when they finally reach their destination, he realizes that the penguin was not lost, but just lonely and looking for a friend. The soft watercolor paintings feature simple shapes and a palette that ranges from pale to bold. The boy has a square body, stick legs, and a round head with tiny dot eyes and an expressive mouth. For much of the tale, the characters are placed on crisp white backdrops, while colorful ocean scenes depict their journey. The text's subtle humor and the appealing visuals make this title a wonderful read-aloud.–Genevieve Gallagher, Murray Elementary School, Charlottesville, VA
Copyright © Reed Business Information, a division of Reed Elsevier Inc. All rights reserved.

Book Description HarperCollins Publishers, 2011. Hardcover. Condition: Good. Good condition is defined as: a copy that has been read but remains in clean condition. All of the pages are intact and the cover is intact and the spine may show signs of wear. The book may have minor markings which are not specifically mentioned. Most items will be dispatched the same or the next working day. Seller Inventory # mon0012208974

Shipping: US$ 5.61
From United Kingdom to U.S.A.
Destination, rates & speeds

Book Description Harpercollins 2011-12-05, 2011. Hardcover. Condition: Good. Item is in good condition. Some moderate creases and wear. This item may not come with CDs or additional parts including access codes for textbooks. Might be an ex-library copy and contain writing/highlighting. Seller Inventory # DS-0007430043-3