Items related to A Divided Spy: A gripping espionage thriller from the...

A Divided Spy: A gripping espionage thriller from the master of the modern spy novel (Thomas Kell Spy Thriller, Book 3) 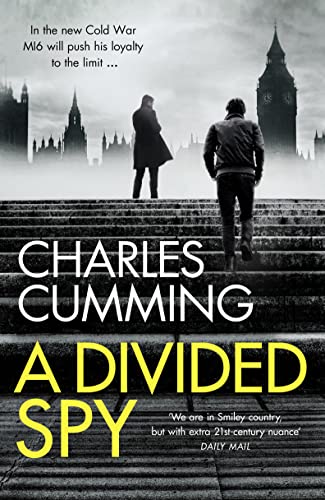 A Sunday Times top ten bestseller, perfect for fans of THE NIGHT MANAGER, from the winner of the CWA Ian Fleming Steel Dagger for Best Thriller of the Year and ‘the master of the modern spy thriller’ (Mail on Sunday).

Thomas Kell thought he was done with spying. A former MI6 officer, he devoted his life to the Service, but all it has left him with is grief and a simmering anger against the Kremlin.

Then Kell is offered an unexpected chance at revenge. Taking the law into his own hands, he embarks on a mission to recruit the Russian spy he blames for the murder of his girlfriend.

Kell tracks his nemesis from Kiev to London, but soon finds himself in a high-stakes game of cat and mouse in which it becomes increasingly difficult to know who is playing whom.

As the mission reaches boiling point, the threat of a catastrophic terrorist attack looms over Britain. Kell is faced with an impossible choice. Loyalty to MI6 – or to his own conscience?

"As usual Cumming’s gift for writing complex, wheels-within-wheels spy stories is on display and Jot Davies, a television and voice actor who has recorded dozens of audiobooks, does a good job of conveying the tension and excitement in the writing and creating great accented voices. Davies can be threatening, dramatic, and emotional when called for. Fans will be delighted and new readers/listeners will have no problem following the action and will doubtless want to read the first two titles in the series." -SoundCommentary.com

"In this final entry in Cumming’s espionage trilogy, series narrator Davies reads the twisty tale of trust and
deceit to perfection...From Kell’s blazing anger at an employee who jeopardizes a setup to ensnare Minasian’s lover, to the stress of a breathless runner, to the pleading of a young woman with her lover, Davies brings each of the characters to life. Whether he’s giving voice to world-weary Kell, an elderly landlady, a German architect, a Russian spy, or even describing a fertility website, Davies is in control, and the listener never questions who is speaking. His timing and pacing are impeccable, and he is equally adept at voicing males and females." -Booklist, Starred Review

"...Jot Davies...gets all the accents just right...As the intricate plot unfolds, with backstories galore and a searing subplot taken from the headlines, you can't help but be caught up in the story, rooting for Kell, but not really wanting to lose Minasian. I hope they'll turn up again." -BookPage

1. A Divided Spy: A gripping espionage thriller from the master of the modern spy novel (Thomas Kell Spy Thriller, Book 3)