Items related to Harper Collins India The Hobbit and The Lord of the...

Harper Collins India The Hobbit and The Lord of the Rings: Boxed Set 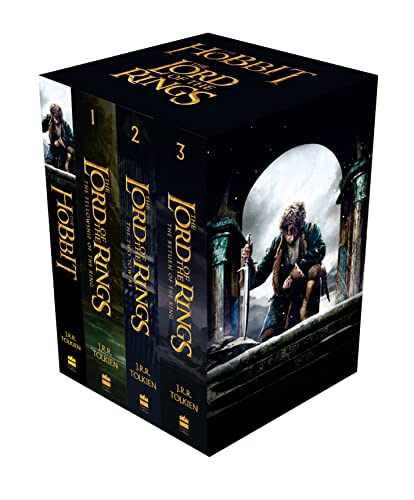 Hobbits and wizards and Sauron--oh, my! Mild-mannered Oxford scholar John Ronald Reuel Tolkien had little inkling when he published The Hobbit; Or, There and Back Again in 1937 that, once hobbits were unleashed upon the world, there would be no turning back. Hobbits are, of course, small, furry creatures who love nothing better than a leisurely life quite free from adventure. But in that first novel and the Lord of the Rings trilogy, the hobbits Bilbo and Frodo and their elvish friends get swept up into a mighty conflict with the dragon Smaug, the dark lord Sauron (who owes much to proud Satan in Paradise Lost), the monstrous Gollum, the Cracks of Doom, and the awful power of the magical Ring. The four books' characters--good and evil--are recognizably human, and the realism is deepened by the magnificent detail of the vast parallel world Tolkien devised, inspired partly by his influential Anglo-Saxon scholarship and his Christian beliefs. (He disapproved of the relative sparseness of detail in the comparable allegorical fantasy his friend C.S. Lewis dreamed up in The Chronicles of Narnia, though he knew Lewis had spun a page-turning yarn.) It has been estimated that one-tenth of all paperbacks sold can trace their ancestry to J.R.R. Tolkien. But even if we had never gotten Robert Jordan's The Path of Daggers and the whole fantasy genre Tolkien inadvertently created by bringing the hobbits so richly to life, Tolkien's epic about the Ring would have left our world enhanced by enchantment. --Tim Appelo

J.R.R.Tolkien (1892-1973) was a distinguished academic, though he is best known for writing The Hobbit, The Lord of the Rings and The Silmarillion, plus other stories and essays. His books have been translated into over 50 languages and have sold many millions of copies worldwide.

THE HOBBIT AND THE LORD OF THE RINGS

The Hobbit And The Lord Of The Rings

The Hobbit and The Lord of the Rings Boxed Set (Paperback)

THE HOBBIT AND THE LORD OF THE RINGS

Book Description Condition: New. Books may ship from multiple locations for easy availability and logistics. PO Box orders may take a little longer for deliveries. All orders are shipped via Fedex/DHL with tracking numbers, other than Remote areas/unserviced areas. Seller Inventory # abe-61831

Harper Collins India The Hobbit and The Lord of the Rings: Boxed Set

The Hobbit and The Lord of the Rings: Boxed Set

The Hobbit and The Lord of the Rings Boxed Set (Paperback)