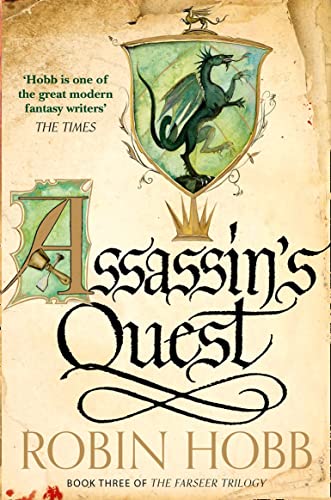 As this epic trilogy reaches its unforgettable conclusion, young FitzChivalry faces his toughest opponent ever: himself. Embittered and broken, his body reclaimed from the grave and his spirit from the care of his bond-wolf Nighteyes, Fitz awakens to a world where everything he once held dear is in ruins. King Shrewd is dead; Prince Regal has claimed the throne and rules the kingdom with a cruel and selfish negligence. Molly has deserted him for parts unknown. Queen Kettricken and her unborn child have fled to the mountains with the Fool, Verity is lost seeking the elusive Elderlings, and Fitz's presumed death forever bars him from Buckkeep. The only companions he had left in his solitude are Chade and Burrich, who wrestle him reluctantly back to humanity after his sojourn in Nighteyes' mind.

But angry with the lot Fate has cast him, Fitz drives away even these loyal companions, and for the first time faces his life on his own, without anyone to guide or lead him. And what he most desires is revenge against Regal, for everything the usurper has cost him. So, preparing his assassin's kit, he sets out for Regal's new capital at Tradeford, determined to murder the treacherous "king." Without guidance, though, he botches the attempt, and an urgent sending by Verity to save him leaves Fitz imprinted with the burning imperative to find and aid his true king in his quest to aid the land.

Eventually fighting his way through to the mountains, he rejoins Kettricken and the Fool in a quest for Verity--and there in the Skill-shadowed hills, he discovers an ancient power and a mysterious riddle, whose answer may well change the fate of the Six Duchies forever.... Copyright © 1997 by Robin Hobb.Robin Hobb.

Robin Hobb is one of the world's finest writers of epic fiction.She was born in California in 1952 but raised in Alaska, where she learned how to raise a wolf cub, to skin a moose and to survive in the wilderness. When she married a fisherman who fished herring and the Kodiak salmon-run for half the year, these skills would stand her in good stead. She raised her family, ran a smallholding, delivered post to her remote community, all at the same time as writing stories and novels. She succeeded on all fronts, raising four children and becoming an internationally best-selling writer. She lives in Tacoma, Washington State.

Book Description Paperback. Condition: New. Language: English. Brand new Book. 'Fantasy as it ought to be written' George R.R. Martin The gripping finale to Robin Hobb's classic Farseer Trilogy. With the king no longer living and the heir, Verity, missing and declared dead, Prince Regal has treacherously seized the throne. Regal's torture has left Fitz more dead than alive, and more closely than ever bonded with his wolf. All who once loved him believe him dead: even Molly, now pregnant with his child. But he cannot go to her without placing her in terrible danger. With nothing to lose, Fitz sets out for Tradeford, where Regal has withdrawn, having heartlessly abandoned the north of the kingdom to the Red-Ship Raiders. His quest: to assassinate the man who has destroyed his world. Seller Inventory # AAZ9780007562275

Shipping: US$ 8.78
From United Kingdom to U.S.A.
Destination, rates & speeds