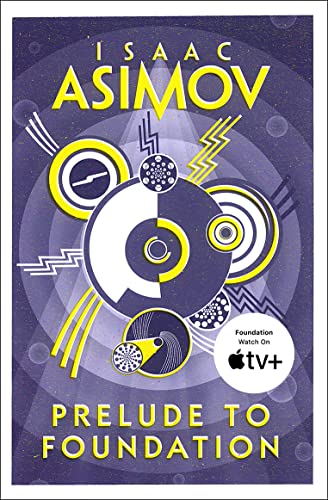 It is the year 12,020 G.E. and Emperor Cleon I sits uneasily on the Imperial throne of Trantor. Here in the great multidomed capital of the Galactic Empire, forty billion people have created a civilization of unimaginable technological and cultural complexity. Yet Cleon knows there are those who would see him fall - those whom he would destroy if only he could read the future.
Hari Seldon has come to Trantor to deliver his paper on psychohistory, his remarkable theory of prediction. Little does the young Outworld mathematician know that he has already sealed his fate and the fate of humanity. For Hari possesses the prophetic power that makes him the most wanted man in the Empire... the man who holds the key to the future - an apocalyptic power to be know forever after as the Foundation.

Isaac Asimov began his Foundation Series at the age of twenty-one, not realizing that it would one day be considered a cornerstone of science fiction. During his legendary career, Asimov penned over 470 books on subjects ranging from science to Shakespeare to history, though he was most loved for his award-winning science fiction sagas, which include the Robot, Empire, and Foundation series. Named a Grand Master of Science Fiction by the Science Fiction Writers of America, Asimov entertained and educated readers of all ages for close to five decasdes. He died, at age of seventy-two, in April 1992.

Book Description Paperback. Condition: New. Language: English. Brand new Book. WINNER OF THE HUGO AWARD FOR BEST ALL-TIME SERIES The Foundation series is Isaac Asimov's iconic masterpiece. Unfolding against the backdrop of a crumbling Galactic Empire, the story of Hari Seldon's two Foundations is a lasting testament to an extraordinary imagination, one that shaped science fiction as we know it today. In a time before the Foundations, psychohistory's creator Hari Seldon is made to stand before the Emperor of the crumbling Galactic Empire to present how his scientific theory of predicting the future might be applied to the real world. However, Hari refuses to deploy his theory for political gain, setting off instead with reporter Chetter Hummin in quest of a place to safely apply his theory: Earth, the original home of humanity. All records of Earth have been lost to time. Hari will therefore have to look back into the past, in order to seal the future of humanity for ever. Seller Inventory # AWC9780008117481

Shipping: US$ 7.88
From United Kingdom to U.S.A.
Destination, rates & speeds