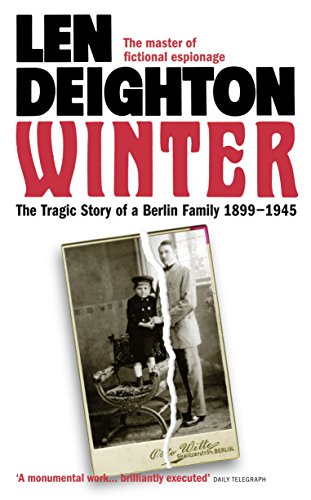 In this gripping prelude to the "Game, Set, Match" trilogy, spies aren't born--they're made. "Winter" tells the tale of a Berlin family divided. Two brothers, Peter and Paul Winter, came of age during the Great War; then as Hitler's power spreads through Germany threatening a new era of violence, the brothers are driven apart by differing morals and ambitions. Meticulously researched, this allegory of a nation at odds with itself paints a brilliant portrait of the German zeitgeist during those turbulent years, and provides a powerful depiction of the rise of the Third Reich.

Born in London,LEN DEIGHTONserved in the RAF before graduating from the Royal College of Art (which recently elected him a Senior Fellow). While in New York City working as a magazine illustrator he began writing his first novel,The Ipcress File, which was published in 1962. He is now the author of more than thirty books of fiction and non-fiction. At present living in Europe, he has, over the years, lived with his family in ten different countries from Austria to Portugal.

`Deighton's research and plotting are as surefooted as ever, while the pace and tension leave one almost breathless. A frightening yet compelling novel' Sunday Telegraph `A monumental work... brilliantly executed' Daily Telegraph `Deighton's most ambitious and subtle book to date, an epic fiction' Evening Standard `Deighton brilliantly depicts the evolution of Hitler's regime through telling detail' Today

Book Description Paperback. Condition: Very Good. Winter: The Tragic Story of a Berlin Family, 1899-1945 This book is in very good condition and will be shipped within 24 hours of ordering. The cover may have some limited signs of wear but the pages are clean, intact and the spine remains undamaged. This book has clearly been well maintained and looked after thus far. Money back guarantee if you are not satisfied. See all our books here, order more than 1 book and get discounted shipping. Seller Inventory # 7719-9780008124885

Book Description Condition: Good. A+ Customer service! Satisfaction Guaranteed! Book is in Used-Good condition. Pages and cover are clean and intact. Used items may not include supplementary materials such as CDs or access codes. May show signs of minor shelf wear and contain limited notes and highlighting. Seller Inventory # 0008124884-2-4

Book Description Paperback. Condition: Very Good. Shipped within 24 hours from our UK warehouse. Clean, undamaged book with no damage to pages and minimal wear to the cover. Spine still tight, in very good condition. Remember if you are not happy, you are covered by our 100% money back guarantee. Seller Inventory # 6545-9780008124885

Book Description Paperback. Condition: Very Good. Epic prelude to the classic spy trilogy, GAME, SET and MATCH, that follows the fortunes of a German dynasty during two world wars. Winter takes us into a large and complex family drama, into the lives of two German brothers - both born close upon the turn of the century, both so caught up in the currents of history that their story is one with the story of their country, from the Kaiser's heyday through Hitler's rise and fall. A novel that rings powerfully true, a rich and remarkable portrait of Germany in the first half of the twentieth century. In his portrait of a Berlin family during the turbulent years of the first half of the century, Len Deighton has created a compelling study of the rise of Nazi Germany. With its meticulous research, rich detail and brilliantly drawn cast of characters, Winter is a superbly realized achievement. The book has been read, but is in excellent condition. Pages are intact and not marred by notes or highlighting. The spine remains undamaged. Seller Inventory # GOR007073378