Items related to The Day The Crayons Quit 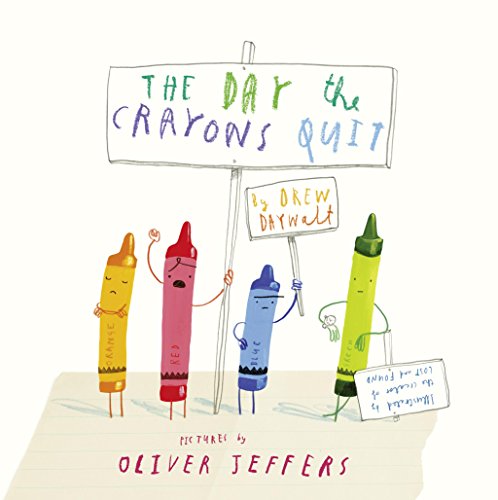 Amazon Best Children's Book of 2013: The Day the Crayons Quit, Drew Daywalt’s clever story of a box of crayons gone rogue will get the whole family laughing at the letters written by the occupants of the ubiquitous yellow and green box. The combination of text and Oliver Jeffers' illustrations match the colors' personalities beautifully as the crayons share their concern, appreciation, or downright frustration: yellow and orange demand to know the true color of the sun, while green--clearly the people pleaser of the bunch--is happy with his workload of crocodiles, trees, and dinosaurs. Peach crayon wants to know why his wrapper was torn off, leaving him naked and in hiding; blue is exhausted and, well, worn out; and pink wants a little more paper time. The result of this letter writing campaign is colorful creativity and after reading this book I will never look at crayons the same way again--nor would I want to. ---Seira Wilson

Although Drew Daywalt grew up in a haunted house, he now lives in a Southern California home, haunted by only his wife, two kids, and five-month-old German Shepherd. His favorite crayon is Black.

Oliver Jeffers (www.oliverjeffersworld.com) makes art and tells stories. His books include How to Catch a Star; Lost and Found, which was the recipient of the prestigious Nestle Children’s Book Prize Gold Award in the U.K. and was later adapted into an award-winning animated film; The Way Back Home; The Incredible Book Eating Boy; The Great Paper Caper; The Heart and the Bottle, which was made into a highly acclaimed iPad application narrated by Helena Bonham Carter; Up and Down, the New York Times bestselling Stuck; The Hueys in the New Sweater, a New York Times Best Illustrated Book of the Year; and This Moose Belongs to Me, a New York Times bestseller. Originally from Belfast, Northern Ireland, Oliver now lives and works in Brooklyn, New York.