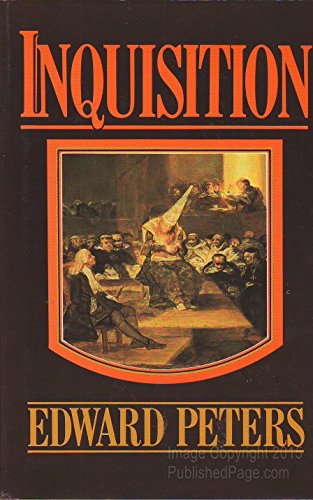 For the past five hundred years, the specter of the Inquisition has haunted the Western imagination. In a superb interpretive history, Peters traces the origins and development of inquisitorial procedure from its secular roots in ancient Roman law to its most famous incarnation in the fiery punishments of the Spanish Inquisition.

Edward Peters, author of the highly acclaimed Torture, is Henry Charles Lea Professor of Medieval History at the University of Pennsylvania.

Inquisition history, a developing field, provides a key to the "understanding of past societies in their entirety." Peters, professor at the University of Pennsylvania and author of Torture, demonstrates this key function as he traces the transformation of the inquisition tribunal from a simple legal procedural of ancient Rome to its employ as a feared instrument of enforcing religious orthodoxy in the medieval period, to its symbolic use in the works of such contemporary writers as Kafka, Koestler and Miller. In Peters's view, the societal divisions brought about by the Reformation in the 16th century provide the grounds for centuries of polemic, fiction and a vivid mythology that caused the term "The Inquisition" to be persistently associated with coercive authority that attempts to stifle free expression. Richly detailed and relevant in application to contemporary philosophy, this study, mainly of interest to historians and social scientists, establishes the thesis that "the history of myth is a valid part of history."
Copyright 1988 Reed Business Information, Inc.