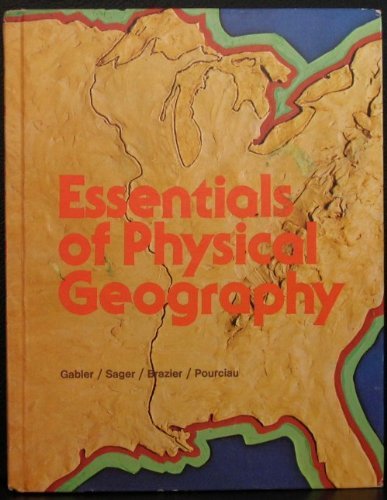 PHYSICAL GEOGRAPHY, 9e, International Edition, uses the combined expertise of four respected geographers to show how Earth's physical geography impacts humans, and how humans impact Earth's physical geography. The text emphasizes three essential themes to demonstrate the major roles for the discipline -- Geography as a Physical Science, Geography as the Spatial Science, and Geography as Environmental Science. With a renewed focus on examining relationships and processes among Earth systems, this text will help you understand how the various systems interrelate and how humans are an integral aspect of geography. Historically the first book to take a conservation approach, the authors continue to emphasize the theme of environmental and human impacts.

Dorothy Sack, Professor of Geography at Ohio University in Athens, Ohio, is a physical geographer who specializes in geomorphology. Her research emphasizes arid region landforms, including geomorphic evidence of paleolakes, which contributes to paleoclimate reconstruction. She has published research results in a variety of professional journals, edited volumes, and with the Utah Geological Survey. She also has research interests and publications on the history of geomorphology and the impact of off-road vehicles. Her work has been funded by the National Geographic Society, NSF, Association of American Geographers (AAG), American Chemical Society, and other organizations. She is active in professional organizations, having served as chair of the AAG Geomorphology Specialty Group, and several other offices for the AAG, Geological Society of America, and History of Earth Sciences Society. She enjoys teaching and research, and has received the Outstanding Teacher Award from Ohio University's College of Arts and Sciences. She is the co-author of Physical Geography, 9th Edition (Brooks/Cole). James F. Petersen is Professor of Geography at Southwest Texas State University, in San Marcos, Texas. He is a broadly trained physical geographer with strong interests in geomorphology and Earth Science education. He enjoys writing about topics relating to physical geography for the public, particularly environmental interpretation, and has written a landform guidebook for Enchanted Rock State Natural Area in Central Texas, as well as several field guides. He is a strong supporter of geographic education, having served as president of the National Council for Geographic education in 2000 after more than 15 years of service to that organization. He also has written or served as a senior consultant for nationally published educational materials at levels from middle school through university, and he has done many workshops for geography teachers. Most recently, he co-edited a volume of the journal GEOMORPHOLOGY, a collection of papers dealing with education in geomorphology that represented the proceedings from the Binghamton Geomorphology Symposium. Two other recent works include the opening chapter for a book on the environmental history of San Antonio, published by the University of Pittsburgh Press, and the role of field methods in geography education in the United States, for an international volume on the topic. In 2011, he received the George J. Miller Award from the National Council for Geographic Education (NCGE). The award, which recognizes distinguished service to geography education, is the highest honor given by the NCGE. L. Michael Trapasso is Professor of Geography at Western Kentucky University, as well as director of the College Heights Weather Station and a research associate with the Kentucky Climate Center. His research interests include human biometeorology, forensic meteorology, and environmental perception. In 1986, he received the Ogden College Faculty Excellence Award. He also has received Fulbright and Malone Fellowships to conduct research in various countries through time. His explorations have extended to all seven continents of the globe, and he has subsequently written and lectured extensively on these travels. His educational publications include laboratory exercises for EXPERIENCES IN PHYSICAL GEOGRAPHY (1980, Duxbury Press), a chapter for CLIMATOLOGY: SELECTED APPLICATIONS (1981, Arnold Publishing), and several entries for the ENCYCLOPEDIA OF CLIMATOLOGY (1987, Van Nostrand/Reinhold Publishing), the ENCYCLOPEDIA OF HYDROLOGY AND WATER RESOURCES (1997, Chapman Hall Publishing), and the upcoming ENCYCLOPEDIA OF WORLD CLIMATES (in press, Kluwer Publishing). In addition to his publications and lectures, he has written and narrated educational television programming concerning weather and climate for the Kentucky Educational Television (KET) Network, and WKYU-TV 24, Western Kentucky University Television. Robert E. Gabler has nearly five decades of professional experience. He has taught for five years in public elementary and secondary schools, in addition to teaching geography at Hunter College, City of New York, Columbia University, and Western Illinois University. At times in his lengthy career at Western, he served as chairperson of the Department of Geography and Department of Geology, and University director of International Programs. He received three University Presidential Citations for Teaching Excellence and University Service, served two terms as chairperson of the Faculty Senate, edited the Bulletin of The Illinois Geographical Society, and authored numerous articles in state and national periodicals. He is a past president of the Illinois Geographical Society, former director of coordinators and past president of the National Council for Geographic Education, and the recipient of the NCGE George J. Miller Distinguished Service Award. During his tenure at Western, Dr. Gabler traveled widely throughout the United States, western and southern Europe, eastern Asia, and India, planning, organizing, and leading university exchange programs, conducting field research, and compiling extensive slide photograph files. His major publications include, editor: A HANDBOOK FOR GEOGRAPHY TEACHERS (Illinois Office of Public Instruction); co-author: FOLLETT ELEMENTARY SOCIAL STUDIES SERIES (Follett Publishing Company); senior author: INTRODUCTION TO PHYSICAL GEOGRAPHY (Rinehart Press); and senior author: ESSENTIALS OF PHYSICAL GEOGRAPHY.