Items related to A fine and pleasant misery 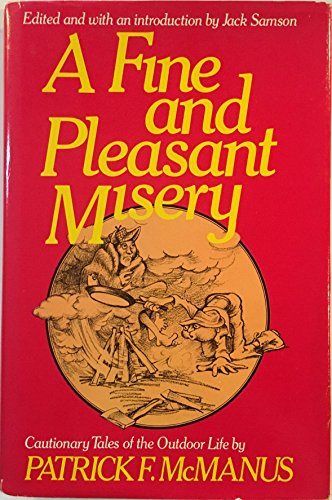 McManus, who wrote monthly for Field & Stream, writes about camping, hiking and hunting in the droll, exaggerated way that was made famous by Mark Twain. In all, 27 cautionary cases and prescriptions are served up in this book. For example: What is the proper procedure when lost in the woods? Contrary to popular opinion, McManus maintains that one SHOULD give way to panic, and gives various genres: modified stationary panic, full-bore linear panic, etc.

Eventually we came to the tiny cabin of a trapper, who had either been a midget or had crawled around on his knees all day, for the structure was only four feet from dirt floor to log ceiling. We tidied the place up by evicting a dead porcupine, split up enough wood to last amonth, and started a fire in a little makeshift stove. The stovepipe was a foot short of the roof and this resulted in the minor inconvenience of having the roof catch fire every once in a while, but nobody really minded. On the second day Kenny and I fought our way up to the lake, where he carried out his vow to fish, and then we stumbled back to the cabin. We stripped off our sopping clothes and sat down side by side on the woodpile next to the stove, whose glowing pipe was sending out soothing waves of heat from the flames howling up through it. Now as was our practice in those days, we had carried enough grub with us to feed a regiment of lumberjacks for a week of full-time eating, and Norm, a rather plump kid, decided to take the edge off his boredom by shooting "baskets" with an excess of hardboiled eggs he had discovered. The opening at the top of the stovepipe served as the "basket." Kenny and I watched in fascinated horror, as they say, as one of the rim shots lodged on the edge of the glowing pipe and the whole contraption began to topple toward our naked laps. Now both of us worked up a sizable amount of activity, but because of the cramped quarters, it was insufficient to move us clear of the descending pipe. In order to avoid incurrence of potentially worse damage to our anatomies we caught the stove pipe in our hands. For two or three hundredths of a second we passed the glowing cylinder back and forth between us, all the while calmly contemplating the best course of action, since neither one of us could manage to accumulate enough free time or leverage to get up from the woodpile. At last it occurred to us to simply drop the pipe on the floor, both of us wondering why we hadn't thought of such an obvious solution sooner. At the time it seemed that we had juggled the stovepipe for approximately two hours, but in retrospect, I doubt that the total time was more than half a second. Smoke, true to its nature, had in the meantime filled the cabin to overflowing and the four of us rolled out through the tiny door hole as a single choking ball of adolescent humanity. The storm outside, particularly to those not wearing any clothes, was refreshing and seemed to call for some strenuous exercise. What followed, as Vern remarked later, was something you don't see every day: two naked and enraged people chasing an hysterical fat kid up the side of a mountain in the middle of a blizzard. In terms of misery, that camping trip was very fine. I once launched my family on a program designed to toughen them up, on the assumption that the more misery they could endure the more they would enjoy hunting, fishing, and camping. Whenever anyone skinned a knee or thumped his "crazy bone," he was to reply in answer to inquiries about the extent of his pain: "A mere detail." Thus my children were expected to ignore the minor miseries encountered in the acquisition of outdoor knowledge and experience, and to make little of mosquito bites, burned fingers, and that vast assortment of natural projectiles known as "stickers." As it turned out, though, I had to abandon the program. One day on a family camping trip, I picked up a large branch for firewood and discovered an outlaw band of yellow jackets waiting in ambush. A running battle ensued. I finally outdistanced the little devils, as I called them, but not before several of them had inflicted some terrible wounds on various parts of my person. My family watched as I flitted like a nymph through the woods, careening off of boulders and leaping mammoth moss-covered logs. Fortunately, as my wife said later, most of my shouts were inaudible and the children were saved from traumas that might havewrought psychological havoc. When I finally lunged back into camp, still sweating and snarling, my littlest girl consoled me with the words, "Details, Daddy, mere details." Well I decided right then and there if a kid can't distinguish between real pain and a little old skinned knee, then I had better call off the whole program, and that is what I did. I mean you don't want your children to grow up to be totally insensitive.

But camping misery is a thing of the past. Like most of my fellow outdoorsmen, having gathered unto the camper the fruits of technology, I am protected from cold by propane, from hardness by foam rubber, and from the insect world by a bug bomb. Still, sometimes I have a nostalgic yearning for some of that old-fashioned misery, and it came to me that what we need nowadays is a misery kit. I think it would find a market, especially among older campers, who might enjoy a bit of instant misery on a camping trip so they would have something to tell the folks back home about. There could be an aerosol can for spraying a blast of cold air down your back every once in a while, another for spraying smoke in your eyes. There might even be a pair of refrigerated boots that you could stick your feet into for a few minutes each morning. A rock or a pine cone could be included for slipping under the fitted sheet of a camper bunk. Everyone, of course, would want a pre-charred spud. There might even be a box of mixed insects--yellow jackets, mosquitoes, ticks, jiggers, and deer flies--but maybe that would be carrying misery a bit far. Copyright © 1968, 1969, 1970, 1971, 1972, 1973, 1974, 1975, 1976, 1977, 1978 by Patrick F. McManus All rights reserved.

A FINE AND PLEASANT MISERY