Items related to The Friendly Four 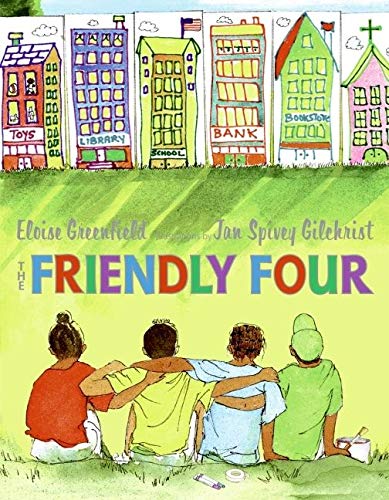 Drum: Didn't I call this summer a bummer?

All: Not anymore, not anymore.

Drum: I was alone, and life was lonely.

All: But not anymore,

Drum: 'cause we're the Friendly Four!

When Drum, Dorene, Louis, and Rae enter one another's lives unexpectedly, they embark on an unforgettable summer of discovery and creative play together. With individual poems and poems for multiple voices, Eloise Greenfield follows four children as they explore the bonds of friendship, family, and community.

Eloise Greenfield's love of writing shines through brilliantly in each and every one of her books, which include Honey, I Love and Other Love Poems and How They Got Over: African Americans and the Call of the Sea, both illustrated by Jan Spivey Gilchrist. She is the recipient of the Coretta Scott King Award, the Foundation for Children's Literature Hope S. Dean Award, and the National Council for the Social Studies Carter G. Woodson Book Award. In 2018 she received the Coretta Scott King–Virginia Hamilton Award for Lifetime Achievement. Ms. Greenfield lives in Washington, DC. You can follow her on Twitter @ELGreenfield.

Jan Spivey Gilchrist is the award-winning illustrator-author of seventy-four children's books. Dr. Gilchrist illustrated the highly acclaimed picture book The Great Migration: Journey to the North, winner of the Coretta Scott King Honor Award, a Junior Library Guild Best Book, an NAACP Image Award nominee, a CCBC Best Book, and a Georgia State Children's Book Award nominee. She won the Coretta Scott King Award for her illustrations in Nathaniel Talking and a Coretta Scott King Honor for her illustrations in Night on Neighborhood Street, all written by Eloise Greenfield. She was inducted into the Society of Illustrators in 2001 and into the International Literary Hall of Fame for Writers of African Descent in 1999. She lives near Chicago, Illinois.

Grade 2-4–Free-verse poems tell the story of a group of children who find each other during one otherwise lonely summer. Seven-year-old Drummer is anticipating a Bummer Summer: Summer's a bummer,/nobody to chase,/nobody to catch the ball/I throw./Hurry up, September!/Get here, fall!/so I can be with/all my friends again. Before long, though, Dorene moves in down the street. Then Louis arrives. The last of the group is Rae, who's sent to stay with Dorene and her family because of her mother's illness. The African-American friends all bond, play, and build and paint an elaborate cardboard town they call Goodsummer. The simple watercolors work well at setting scenes of tidy streets lined with homes and lots of backyards and parks. Gilchrist's talent shows in her use of color, splashed with light, but some of her figures look a bit stiff. The children's voices are printed in different colors, making this title a natural choice for choral reading. For a younger audience than most novels-in-verse, this accessible and well-written book has a nostalgic tone–you don't see a television or computer game anywhere, and the children's play is centered on activities such as dress-up, slides and swings, and playing school.–Lauralyn Persson, Wilmette Public Library, IL
Copyright © Reed Business Information, a division of Reed Elsevier Inc. All rights reserved.