Items related to Love-Set-Match (Two of a Kind #29) 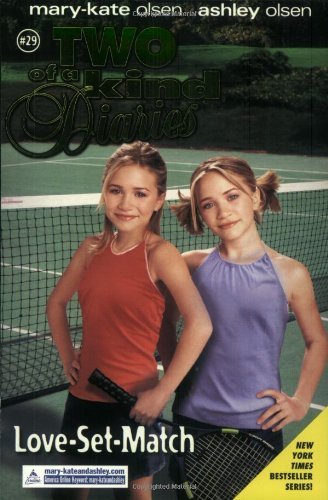 I decided to join the big tennis tournament at camp. My doubles partner, Andrew, is really cute! The coach says we can't date, but Andrew says we should break the rules. Hmmm. I guess we'll just have to make sure we don't get caught!

Well, it's official. I can tie three kinds of knots and climb a tree in under three minutes. How is this useful, you ask? It's all apart of a contest our camp is having with the rival camp down the road, and I want to win! But someone is standing in the way of our victory. My very own sister!

Mary-Kate and Ashley have been celebrities since the day when, at the age of nine months, they joined the cast of the hit sitcom "Full House" in their shared role as Michelle. Each of Mary-Kate and Ashley's 14 years since has witnessed the outstanding expansion of their popularity...their fans have literally grown up alongside the twins! First in television and feature films, Mary-Kate and Ashley now appear in videos, music, interactive software, fashion dolls and accessories, and more. Their latest ventures include launching their official website and debuting a line of licensed fashion clothing, as well as their very own magazine in spring 2001.

Mary-Kate & Ashley books launched in 1990, and today the various book series continue to grow to reflect the ever-evolving lifestyles of kids, 'tweens, and teens. HarperEntertainment and Parachute Publishing release twenty-five books a year and have sold more than 30 million copies. Mary-Kate and Ashley's two book series Two of a Kind and The New Adventures of Mary Kate and Ashley are frequent USA Today bestsellers. And Mary-Kate & Ashley novelties, such as Wall Calendars, a Mood Diary, a Be My Valentine card-making kit, and the movie tie-in series, Starring-In continue to be hugely popular.

The growth of the Mary-Kate & Ashley brand has afforded Parachute and Harper the opportunity to work with companies such as Acclaim Entertainment, Mattel Inc., Warner Home Video, Kid Rhino, Lightyear Entertainment, Sail with the Stars on cross-promotional and cross-merchandise projects, including a very special, book-dedicated area on mary-kateandashley.com -- Now Read This!

Book Description HarperEntertainment, 2003. Paperback. Condition: GOOD. Has little wear to the cover and pages. Contains some markings such as highlighting and writing. Seller Inventory # 0060093250_abe_gd

Book Description HarperEntertainment, 2003. Condition: Good. A+ Customer service! Satisfaction Guaranteed! Book is in Used-Good condition. Pages and cover are clean and intact. Used items may not include supplementary materials such as CDs or access codes. May show signs of minor shelf wear and contain limited notes and highlighting. Seller Inventory # 0060093250-2-4

Book Description Paperback. Condition: Fair. A readable copy of the book which may include some defects such as highlighting and notes. Cover and pages may be creased and show discolouration. Seller Inventory # GOR010424252