Items related to This Is Orson Welles

This Is Orson Welles 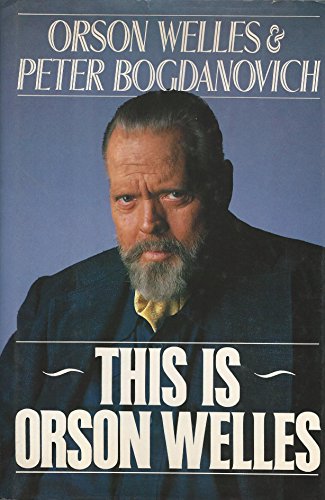 In 1992, the first publication of This Is Orson Welles brought a priceless document to light. In the late '60s and early '70s, filmmaker Peter Bogdanovich had conducted extensive interviews with Welles, but a number of circumstances--including the director's decision to compose an autobiography that he never got around to writing--kept the interviews out of the public eye. Edited and annotated by Jonathan Rosenbaum, these conversations give wonderful insights into Welles's craft and personality. He discusses his forays into acting, producing, and writing as well as directing, his confidences and insecurities, and his plans for film projects that were either never made or only partially completed. He also offers insights into the triumph of Citizen Kane and later masterpieces like The Lady from Shanghai, Touch of Evil, Othello, and Chimes at Midnight. His defense of his controversial adaptation of Kafka's The Trial is so fascinating that readers might want to rush out and rent the film.

While the book is worth owning just for this 322-page interview, it is also full of other material that is equally revealing. Rosenbaum presents a meticulous chronology of Welles's life, closely following his day-to-day activities from his birth in 1915 to his death in 1985. Anyone who thinks that Welles was an essentially lazy and profligate artist will be astonished at how hard he worked and how much he accomplished, even after the completion of Citizen Kane. Another treat found in the book is a detailed description--complete with rare photographic stills--of the original Magnificent Ambersons, Welles's impressive follow-up to Kane, which can now be seen only in a tragically truncated version.

This 1998 reissue of the volume contains a fond new introduction by Bogdanovich and another crucial piece of Welles minutia, excerpts from his 58-page memo to Universal Pictures about the editing of Touch of Evil. Forty years after its composition, the material in this memo has been used to create a restored "director's cut" of the film. With such grand material between two covers, This Is Orson Welles is the most informative and entertaining book available on one of the 20th century's greatest artists. --Raphael Shargel

Orson Welles (1915-1985) was the last true Renaissance man of the twentieth century. From such great radio works as "War of the Worlds" to his cinematic masterpieces Citizen Kane, The Magnificent Ambersons, Othello, Macbeth, Touch of Evil, and Chimes at Midnight, Welles was a master storyteller. This is Orson Welles, a collection of penetrating and witty conversations between Welles and Peter Bogdanovich, includes insights into: Welles' radio, theater, film, and television work; Hollywood producers, directors, and stars; and almost everything else, from acting to magic, literature to comic strips, bullfighters to gangsters.

1. This Is Orson Welles

2. This Is Orson Welles

3. This Is Orson Welles

4. This Is Orson Welles