Items related to A Suitable Boy: A Novel

A Suitable Boy: A Novel 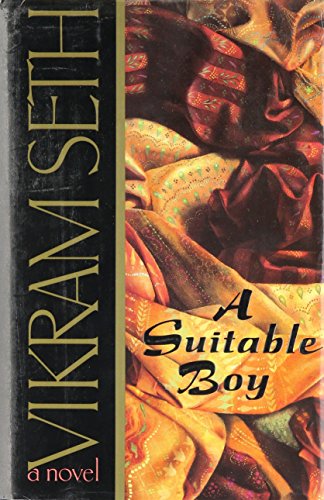 While a widowed mother agonizes over her daughter's future, the newly independent India of the early 1950s struggles through a time of great crisis when its varied cultures clash. 100,000 first printing. $200,000 ad/promo. BOMC Main. QPB Alt. Tour.

Vikram Seth was born in 1952. He trained as an economist and has lived for several years each in England, California, China and India. He is the author of A Suitable Boy, which was an international number one bestseller, An Equal Music and several other novels. He has also written five volumes of poetry including Beastly Tales.

Set in newly independent India, Nehru's early 1950's, this adipose saga counterbalances a book of social manners--the marrying off of a well-to-do educated young woman, Lata Mehra--with a historical account (even at the level of transcribed parliamentary debate) of the subcontinent trying to find its societal bearings vis-...-vis language, religion, and the redistribution of estate-lands taken off the hands of the elite. Set mainly in Brahmpur, the story encompasses four well-off families, with a focus mostly on the younger members--poets, academics, playboys, newlyweds--who stitch a pattern of peccadillo through their elders' expectations. Meanwhile, Seth, whose California novel in verse, The Golden Gate (1986), was clever and energetic in concept but dull and soapy in final effect, falls into the same trap here: lots of stuff obviously--at a marathon 1300-plus pages--but characters made out of clich‚, with background-India the very stuffed pillow of local color that keeps them standing. The book, too, fairly squeaks with its own pleasure in itself, larded with poetry and a general recommendation of art over politics and money: the characters it spends the most time over are narcissists. Anyone wanting to read how a marriageable daughter can X-ray a whole society ought to let this cream-puff-wrapped-in-a-cinder-block pass and return to Tanizaki's classic Japanese masterpiece, The Makioka Sisters. Fat (the publishing world's delayed reparation for Rushdie's Satanic Verses?) but fatuous. (First printing of 100,000; Book-of- the-Month Dual Selection for May) -- Copyright ©1993, Kirkus Associates, LP. All rights reserved.

Book Description Harper Collins, 1993. Hardcover. Condition: New. 1st U.S. ed. This is a brand new book! Fast Shipping - Safe and Secure Mailer - Our goal is to deliver a better item than what you are hoping for! If not we will make it right!. Seller Inventory # 1XGGTE000WK3_ns