Items related to Unlocking the Air and Other Stories

Unlocking the Air and Other Stories 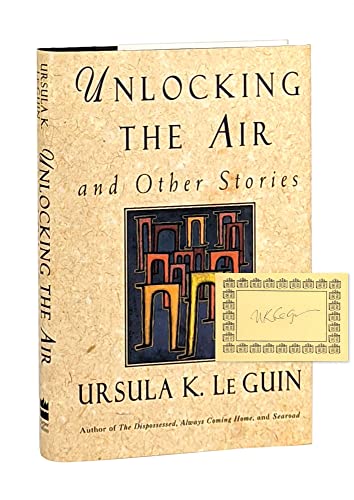 One of America's most respected, most admired writers--winner of the National Book Award in 1992 and twice a finalist--delivers an eloquent and moving collection of mainstream short stories.

Hugo and Nebula awards cling to her writings like iron filings to a magnet. Even so, Le Guin has written numerous stories with no hint of scientific speculation or fantasy?like the majority of the 18 tales in this collection, many of which first appeared in the New Yorker, Harper's, Playboy and elsewhere during the past 14 years. Set partially in an abortion clinic and steeped in realism, "Standing Ground" is a truthful and difficult story, first published in Ms., about the plight of a teenage girl and her pregnant, retarded mother. On the other end of the spectrum is "Poacher," an inversion of the Sleeping Beauty myth wherein the use of mind and spirit is itself the ultimate reward. Also particularly strong is "Half Past Four," a virtuoso literary exercise that evokes a wide range of emotions as Le Guin rearranges the situations and sensibilities of a small group of characters, focusing primarily on three adults and their relationships to a retarded infant. The collection flows like water: it's sometimes rough and agitated; sometimes playful, as in "Limberlost," in which an author returns to the campground of her youth, now the site of a rustic literary conference; and sometimes reflective, as in the title story, a parable/fairy tale about love and political change in a place where "[t]hey stood on the stones in the lightly falling snow and listened to the silvery, trembling sound of thousands of keys being shaken, unlocking the air, once upon a time." Admirers of fine literature, fantastic or not, will cherish this rich offering.
Copyright 1996 Reed Business Information, Inc.

1. Unlocking the Air and Other Stories

2. Unlocking the Air and Other Stories