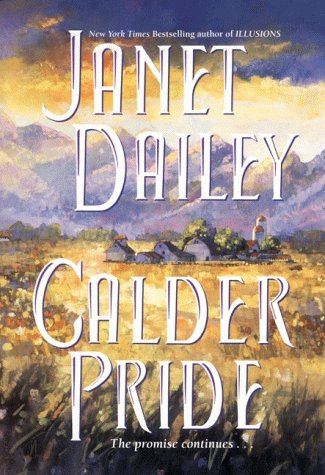 Living is never easy
When someone you love has died,
And you have nothing to fall back on
But that iron Calder pride.

After fifteen years Janet Dailey returns to the beloved Calder clan in this long-anticipated novel, the newest addition to the bestselling Calder series!

Cat is a Calder through and through: proud, headstrong, intelligent, and extremely beautiful. When her fiancé is accidentally killed, she retreats to the family homestead to mourn, vowing never to give her heart to another man. But one reckless night with a handsome, gray-eyed stranger changes her life forever--and gives her a son with striking gray eyes.

Cat decides to raise the child on her own, as a Calder, and live with her family on the Triple C Ranch. Even though the town has watched Cat grow from a girl to a young woman, they treat her as an outcast when they learn she is an unwed mother. Despite her family's wealth and power--or because of it--Cat is gossiped about meanly, and it takes all her pride to hold her head up and ignore what she knows is being said behind her back.

But Cat cannot ignore the new sheriff, Logan Echohawk. It isn't his rugged good looks that cause her heart to skip a beat when he first arrives in town--it's his striking gray eyes. It seems impossible, but the man she thought she would never see again is now a part of her life--whether she wants him to be or not. And will he notice her son's eyes and figure out what she vowed never to tell him?

Cat finds herself torn between her promise to her first love and powerful, unexpected feelings for her child's father. With her family standing firmly behind her, and her son's future in her hands, Cat must decide: Will she take a chance on a new, true love?

Wonderfully romantic, and as sweeping as the Montana plains, Calder Pride will delight and satisfy Janet Dailey fans, both old and new.

Cat Calder is grief stricken when her young fiancé is killed in a car accident. Emotionally devastated and vulnerable, Cat's final evening in town--meant to be spent with close college friends--ends instead in the arms of a handsome, gray-eyed stranger. Nine months later, Cat gives birth to a healthy baby boy and raises him in the protective bosom of her powerful family; everything changes the day a lawman--with arresting gray eyes--arrives in Blue Moon, Montana. Logan Echohawk has never forgotten that night or the beautiful stranger, and it only takes one long look at the boy to know that the brief, passionate encounter had created a child.

While Cat struggles to come to grips with Logan's appearance, an enemy's long-smoldering thirst for revenge flares to life, threatening Logan, Cat, and their beloved son. Will Logan's training as a lawman be enough to save his family? And even if everyone survives, will Cat have the courage to chance her heart and love again?

The newest installment in Janet Dailey's much loved Calder family saga, Calder Pride possesses both complex characters and a compelling plot line--one infused with a suspense element that Dailey conveys as effortlessly as the essence of a Montana ranching community that will charm the reader throughout. Intelligent and strong, Cat is well balanced by Logan, who is her equal, whether they're riding horses, roping cattle, battling bad guys, or making love. Fans who fell in love with earlier Calder novels will be delighted with this latest chapter in the family chronicle. --Lois Faye Dyer

Janet Dailey's first book -- a Harlequin romance -- was published in 1976. In the twenty years since, she has written 89 more novels and become the third largest selling female author in the world, with 300 million copies of her books sold in 19 languages in 98 countries. Her most recent bestsellers, Masquerade, Rivals, and Heiress, have all sold more than one million copies each. She is known for her strong, decisive characters, her extraordinary ability to re-create a time and place, and her unerring courage to confront important, controversial issues, like alcoholism and sexual abuse, in her stories.

All of her novels are meticulously researched, an endeavor she shares with her husband, Bill Dailey. The couple met in 1963, when Janet worked as a secretary for the construction company Bill owned. The two travel extensively to scout story locations, and have visited all 50 states; these days, they are likely to fly, but miss the time when they drove cross country, a trailer attached to their car. Janet Dailey also reads voraciously about every aspect of any subject she writes about; as she remarks, "Accuracy is important in genre fiction; you have to get it right, zero in on the real details. That's the way to make writing come alive and not irritate the readers with carelessness."

When they are not traveling, the couple spend time at their home on the shore of Lake Taneycomo in Branson, Missouri. It is the part of the country Dailey loves best, partly because, she says, "The people around me are more interested in their problems and their lives, and that sort of keeps me in touch with reality. They think it's nice that I write, but they really couldn't care less."

Allison Janney has been featured on Broadway (Present Laughter), in films (Big Night and First Wives Club) and on television shows on all four networks.