Items related to Out in the Garden: Growing a Beautiful Life

Riddle, Dean Out in the Garden: Growing a Beautiful Life

Out in the Garden: Growing a Beautiful Life 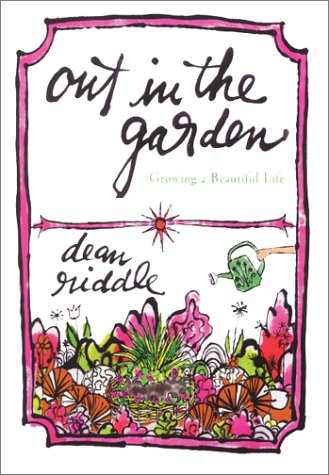 The very mood and atmosphere of the garden -- its scents, colors, and textures -- are often indelibly linked to scenes from the gardener's life. As he dispenses excellent hands-on gardening advice in Out in the Garden, Riddle draws on his past and present, reflecting on family, childhood, and growing up gay in South Carolina.

Back in 1980, when Dean Riddle was a young horticulture student, he "thought annual flowers, not to mention birdbaths, were the heights of frivolity -- things to amuse and occupy little old ladies." Thinking himself a serious plants-man with "no interest whatsoever in design," he dreamed of collecting woodland wildflowers, rare trees, and flowering shrubs native to the Blue Ridge Mountains, where he was born and where he developed and nourished a deep love of plants and the natural world.

A decade later, after living in various parts of the country and making gardens for other people, Dean Riddle settled in the Catskill Mountains. There, he finally got the chance to make his own first garden-"a small garden of sticks and stones with a swept dirt floor." But instead of planting rare stewartias and speckled trout lilies, he grew old-fashioned flowers and everyday vegetables like the ones he remembered from his aunt and uncle's farm in South Carolina. In the process he learned the value of good design and the importance of relating house to garden. And he discovered that the good life "has far less to do with money than it does with style, awareness, and gratefulness."

Riddle's thoughts on gardening are astute and straightforward. His storytelling, while at times poignant, is punchy and hilarious. Honest, helpful, and always entertaining, Out in the Garden is both a "how-to" manual and a memoir -- and succeeds masterfully at both.

Dean Riddle studied horticulture in England and in North Carolina. He pens a regular column, "Dean's Dirt," in Elle Décor magazine and contributes to Country Gardens and Gardens Illustrated. His gardens have been widely published in books and magazines. He lives near Phoenicia, New York. Out in the Garden is his first book.

An accomplished horticulturist who has written prolifically for Elle D‚cor and gardening publications, the author communicates his passion for his profession in this appealing memoir. It is not necessary to have an extensive knowledge of gardening to appreciate the practical advice Riddle offers. He draws on his own practice to demonstrate all aspects of garden making, from initial design to choice of plants, deployment of water and fertilizer and the use of containers. Raised in South Carolina, Riddle studied horticulture in England before eventually settling in upstate New York. For the last 10 years, he has been renting a simple bungalow with spectacular mountain views. Here he's designed a fenced kitchen garden, enclosed by sticks and filled with vegetables and flowers, a creation that has given him "more pleasure and taught me more than I ever would have imagined." Riddle effectively conveys the joys of a relatively modest lifestyle lived in the midst of great natural beauty. Interspersed are reminiscences of his beloved parents and descriptions of the gardens that impressed him as a child. He also reflects on his life as a gay man and recalls the death of a friend from complications of AIDS. Although he never came out to his parents, now deceased, Riddle is certain his mother understood and accepted his identity. Stylishly written with gentle humor, Riddle's reminiscence is, in its quiet way, inspiring. B&w illus.
Copyright 2002 Cahners Business Information, Inc.

1. Out in the Garden: Growing a Beautiful Life

2. Out in the Garden: Growing a Beautiful Life

3. Out in the Garden: Growing a Beautiful Life

4. Out in the Garden: Growing a Beautiful Life

5. Out in the Garden: Growing a Beautiful Life Riddle, Dean

Book Description Condition: New. An enchanting and entertaining gardening guide, sprinkled with personal reflections and memories of the author's childhood, family, and growing up gay in South Carolina, shows readers how to turn any outdoor space into an inviting garden, filled with deep meaning. Seller Inventory # 9780060188054