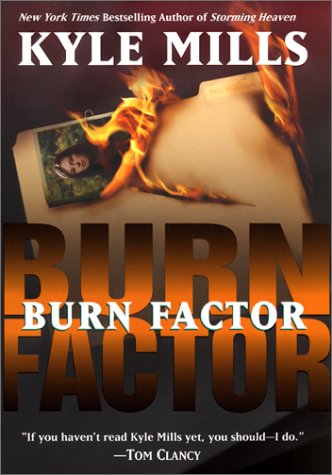 Bestselling novelist Kyle Mills took the nation by storm with his stunning debut thriller, Rising Phoenix, a powerful tale of intrigue and suspense that introduced maverick FBI agent Mark Beamon. Frederick Forsyth raved, "In the world of political thrillers, I have the feeling that young Kyle Mills will soon be a very big player." Now Kyle Mills returns with his most riveting story yet, an edge-of-the-seat drama featuring a new star -- female FBI employee Quinn Barry.

Bright, young, and ambitious, Quinn Barry desperately wants to be an FBI agent. Right now, though, she's just a low-level employee toiling in the basement at Quantico. But Quinn's career -- and her life -- are about to change wildly. Testing her new database program, Quinn turns up a mysterious DNA link among five gruesome murders. A link that the old FBI computer system had been carefully programmed to miss. The discovery lands her a demotion to the hinterlands, followed by a series of unfortunate "accidents" that nearly end her life.

Pitted against a conspiracy of unimaginable proportions, Quinn is determined to uncover what someone very powerful wants to keep hidden -- dark, dirty secrets involving high levels of government. She turns for help to her boyfriend, an ambitious young CIA agent, only to flee to protect herself and, she hopes, him. Finally an ally emerges from teh most unlikely place of all, and with his help Quinn will at last turn the tables on her shadowy assailants -- and land herself in the clutches of a sadistic, brilliant madman who holds the key to it all.

Bristling with the galvanizing suspense and hair-trigger action that Kyle Mills's fans have come to expect, Burn Factor is certain to carve another notch in bestseller lists nationwide.

Why would the FBI want to cover up a link between five unsolved murders, especially a link as telling as matching DNA recovered from every one of the crime scenes? That's the premise of Kyle Mills's Burn Factor. Instead of his usual hero, FBI agent Mark Beamon, the author introduces Quinn Barry, a relatively low-level analyst for the agency who stumbles across what at first looks like a glitch in the computer's forensics program. But of course it's not--the serial killer protected by the powers that be is a truly mad scientist who's indispensable to the completion of a top-secret weapons project. Quinn, whose lifelong ambition is to move up in the ranks and become a full-fledged FBI agent, is transferred out of her programming job as soon as she brings the link to the attention of superiors. But the plucky woman ignores their warnings and enlists the aid of another scientific genius, who also happens to be the chief suspect in at least one of the gruesome murders she's intent on solving.

Burn Factor is big on implausible and illogical plot twists, and small on characterizations. We never learn enough about Quinn to understand why she puts her career (not to mention her life) in jeopardy, even as evidence of a massive cover-up continues to mount and her boyfriend, a CIA agent, turns out to be a willing accomplice to the conspirator-in-chief. Fans of Mills's previous novels (Rising Phoenix, Storming Heaven, Free Fall) who keep waiting for Beamon to show up and save the day will be disappointed, especially since the author doesn't quite succeed in making Quinn Barry as appealing a protagonist. --Jane Adams