Items related to Gettysburg: A Testing of Courage

Gettysburg: A Testing of Courage 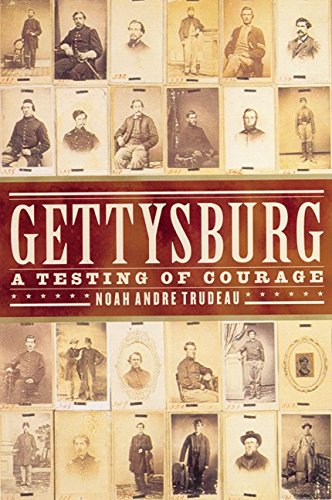 America's Civil War raged for more than four years, the three days of fighting in the Pennsylvania countryside in July 1863 continue to fascinate, appall, and inspire new generations with their unparalleled saga of sacrifice and courage.

No battle was as deadly or dramatic as Gettysburg. More lives were lost there than in any other war fought on American soil. From Chancellorsville, where General Robert E. Lee launched his high-risk campaign into the North, to the Confederates' last daring and ultimately doomed act, forever known as Pickett's Charge, the battle of Gettysburg gave the Union army a victory that turned back the boldest and perhaps greatest chance for a Southern nation.

The last three decades have seen scores of remarkable new studies focusing on important elements of this monumental campaign. Now, acclaimed historian Noah Andre Trudeau brings the most up-to-date research available to a brilliant, sweeping, and comprehensive history that sheds new light on virtually every aspect of the battle of Gettysburg. Deftly balancing his own narrative style with revealing firsthand accounts, including excerpts from the diaries and letters of the men on both sides of the battlefield, Trudeau brings this engrossing human tale to life. He recounts the heightening tension of the campaign, the life-or-death decisions made by its commanders, and the struggle endured by thousands of its bravest soldiers. Not forgotten are the stories of the noncombatants, the thousands of civilians whose placid lives were swept into the ferocious cauldron.

Scrupulously researched and masterfully written, Gettysburg conveys all the drama and heroism in what is sure to be the defining account for years to come of this pivotal moment in American history.

Noah Andre Trudeau is the author of Gettysburg. He has won the Civil War Round Table of New York's Fletcher Pratt Award and the Jerry Coffey Memorial Prize. A former executive producer at National Public Radio, he lives in Washington, D.C.

Making comprehensive and sophisticated use of a broad spectrum of archival and printed sources, NPR executive producer Trudeau (Bloody Roads South) enhances his reputation as a narrative historian of the Civil War with what is to date the best large-scale single-volume treatment of those crucial three days in July 1863, elegantly reconstructing the battle and the campaign from the perspectives of the participants. Trudeau allows them, from generals to enlisted men, to speak in their own words, creating a thoroughly absorbing story of determination on both sides and at all levels. Robert E. Lee began the campaign intending to win a battle of annihilation. July 1 inaugurated some of the hardest, and the most exacting, fighting American soldiers have ever done. The operational narratives are remarkable for their clarity, especially Trudeau's presentation of the confused fight for the Union left flank on July 2. The text is supplemented by sketch maps of unit positions and movements that are also models of clarity a particular boon to nonspecialist readers. Trudeau defensibly concludes that the wide latitude allowed subordinates at all levels of the Army of Northern Virginia worked against it at Gettysburg. Further, his emphasis on contemporary sources instead of postwar retrospection and academic analysis shows that despite nearly equal losses totaling almost 50,000 men Gettysburg failed as Lee's battle of annihilation.
Copyright 2002 Cahners Business Information, Inc.

1. Gettysburg: A Testing of Courage

2. Gettysburg: A Testing of Courage