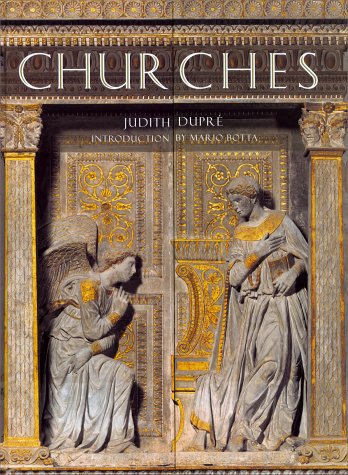 Churches is a work that reflects the grandeur of its subject matter. In this book, Judith Dupre presents an architectural tour of fifty-nine of the world's most enduring Christian churches, from such celebrated landmarks as St. Peter's Basilica in Vatican City, Frank Lloyd Wright's Unity Temple in Oak Park, Illinois, and Le Corbusier's Chapel at Notre-Dame-du-Haut in Ronchamp, France, to lesser-known masterpieces, including Huialoha Congregational Church on Maui and the Church on the Water in Hokkaido, Japan. Special theme essays cover the earliest Christian churches, the construction of Gothic cathedrals, the evolution of the baptismal font, churches designed by contemporary artists, and the revival of meditative labyrinth walking. With photographs and essays, this book offers a nuanced portrait of each structure, blending its architectural history with a deep appreciation for art and a reverence for religious traditions. Encompassing houses of worship from six major Christian denominations and all corners of the earth, Churches is a chronology of faith and achievement that will inspire anyone interested in architecture, art, travel, religion, or photography.

The physical dimensions alone would be enough to make Churches, Judith Dupre's sumptuous chronology of Christian art and architecture, one of the most absorbing ways possible to learn about the world's most beautiful houses of worship. It is almost too big to fit in your lap, and each brilliantly colored page is almost three times the width of a human head. In addition, Churches offers floor plans, histories, and theological interpretations of almost 60 churches around the world, from the Pantheon in Rome to La Sagrada Familia in Barcelona to the Crystal Cathedral in Garden Grove, California. Interspersed with these chapters are photographic essays on such topics as "Building a Gothic Cathedral" and "Ancient Paths: Contemporary Labyrinths." All of the images and essays are presented in a format accessible to the general reader. Those more broadly informed about architecture will be drawn to the interview with Swiss-Italian architect Mario Botta--his first in-depth interview published in English. In the end, the book's most amazing accomplishment is to provide readers with sensations that approximate both the grandeur and the intimacy of visiting the churches it depicts. --Michael Joseph Gross

Judith Dupre writes books that bridge the worlds of art, photography, and architecture. She has written six books of illustrated nonfiction that have been translated into ten languages, including the best-selling titles SKYSCRAPERS (intro. Philip Johnson), BRIDGES (intro. Frank Gehry), and CHURCHES (intro. Mario Botta). She is currently working on MONUMENTS: LIFE IN MEMORY, a collection of essays about memorial architecture that will be published by HarperCollins in 2005. She graduated from Brown University with degrees in English literature and studio art, and did postgraduate work at Hunter College and the Open Atelier of Design and Architecture, both in New York City. In 2003, she received the Washington Irving Book Award for CHURCHES, selected by the Westchester Library Association as the best nonfiction book of 2001; that book also appeared on the New York Times Bestseller List. Ms. Dupre lives in Westchester County, New York with her husband and two sons.