Items related to Their Eyes Were Watching God

Their Eyes Were Watching God 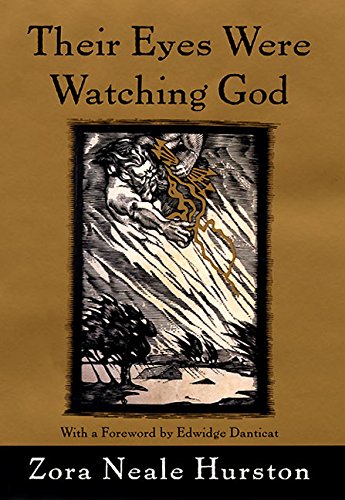 “A deeply soulful novel that comprehends love and cruelty, and separates the big people from the small of heart, without ever losing sympathy for those unfortunates who don’t know how to live properly.” —Zadie Smith

One of the most important and enduring books of the twentieth century, Their Eyes Were Watching God brings to life a Southern love story with the wit and pathos found only in the writing of Zora Neale Hurston. Out of print for almost thirty years—due largely to initial audiences’ rejection of its strong black female protagonist—Hurston’s classic has since its 1978 reissue become perhaps the most widely read and highly acclaimed novel in the canon of African-American literature.

At the height of the Harlem Renaissance during the 1930s, Zora Neale Hurston was the preeminent black woman writer in the United States. She was a sometime-collaborator with Langston Hughes and a fierce rival of Richard Wright. Her stories appeared in major magazines, she consulted on Hollywood screenplays, and she penned four novels, an autobiography, countless essays, and two books on black mythology. Yet by the late 1950s, Hurston was living in obscurity, working as a maid in a Florida hotel. She died in 1960 in a Welfare home, was buried in an unmarked grave, and quickly faded from literary consciousness until 1975 when Alice Walker almost single-handedly revived interest in her work.

Of Hurston's fiction, Their Eyes Were Watching God is arguably the best-known and perhaps the most controversial. The novel follows the fortunes of Janie Crawford, a woman living in the black town of Eaton, Florida. Hurston sets up her characters and her locale in the first chapter, which, along with the last, acts as a framing device for the story of Janie's life. Unlike Wright and Ralph Ellison, Hurston does not write explicitly about black people in the context of a white world--a fact that earned her scathing criticism from the social realists--but she doesn't ignore the impact of black-white relations either:

It was the time for sitting on porches beside the road. It was the time to hear things and talk. These sitters had been tongueless, earless, eyeless conveniences all day long. Mules and other brutes had occupied their skins. But now, the sun and the bossman were gone, so the skins felt powerful and human. They became lords of sounds and lesser things. They passed nations through their mouths. They sat in judgment.

One person the citizens of Eaton are inclined to judge is Janie Crawford, who has married three men and been tried for the murder of one of them. Janie feels no compulsion to justify herself to the town, but she does explain herself to her friend, Phoeby, with the implicit understanding that Phoeby can "tell 'em what Ah say if you wants to. Dat's just de same as me 'cause mah tongue is in mah friend's mouf."

Hurston's use of dialect enraged other African American writers such as Wright, who accused her of pandering to white readers by giving them the black stereotypes they expected. Decades later, however, outrage has been replaced by admiration for her depictions of black life, and especially the lives of black women. In Their Eyes Were Watching God Zora Neale Hurston breathes humanity into both her men and women, and allows them to speak in their own voices. --Alix Wilber

Their Eyes Were Watching God, an American classic, is a luminous and haunting novel about Janie Crawford, a Southern black woman in the 1930s whose journey from a free-spirited girl to a woman of independence and substance has inspired writers and readers for close to seventy years.

This poetic, graceful love story, rooted in black folk traditions and steeped in mythic realism, celebrates, boldly and brilliantly, African-American culture and heritage. And in a powerful, mesmerizing narrative, it pays quiet tribute to a black woman, who, though constricted by the times, still demanded to be heard.

Originally published in 1937, Their Eyes Were Watching God met significant commercial but divided critical acclaim. Somewhat forgotten after her death, Zora Neale Hurston was rediscovered by a number of black authors in the late 1960s and early 1970s, and reintroduced to a greater readership by Alice Walker in her 1972 essay "In Search of Zora Neale Hurston," written for Ms. magazine. Long out of print, the book was reissued after a petition was circulated at the Modern Language Association Convention in 1975, and nearly three decades later Their Eyes Were Watching God is considered a seminal novel of American fiction.

With a new foreword by the celebrated novelist Edwidge Danticat -- author of Eyes, Breath, Memory; The Farming of Bones; and Krik?Krak! -- this edition of Their Eyes Were Watching God commemorates the singular, inimitable voice in America's literary canon and highlights its unusual publication history.

1. Their Eyes Were Watching God

2. Their Eyes Were Watching God

3. Their Eyes Were Watching God

4. Their Eyes Were Watching God

5. Their Eyes Were Watching God

6. Their Eyes Were Watching God