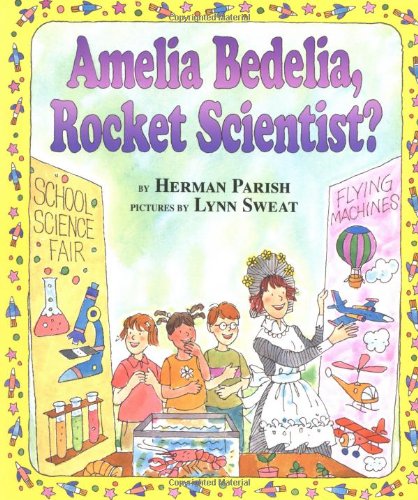 Amelia Bedelia is at the school science fair!

K-Gr. 2. When Amelia Bedelia volunteers to help at a school science fair, she soon becomes the center of chaos. Children willing to suspend disbelief during the episodic story will be rewarded with a few laughs as the amiable mistress of misinterpretation tries to help the children and the judge, a professor improbably named Dinglebatt. After Amelia Bedelia pours too much baking soda into Jason's soda-and vinegar-powered volcano model, it produces an explosion instead of the usual fizzle and drizzle. Using the leaf blower from Wendy's flying-saucer demonstration, she attempts to control the eruption. Instead, she sends Dr. Dinglebatt's hairpiece soaring across the gym. Well designed for young readers and brightened with ink-and-watercolor illustrations, this cheerful book extends the popular series. Carolyn Phelan
Copyright © American Library Association. All rights reserved