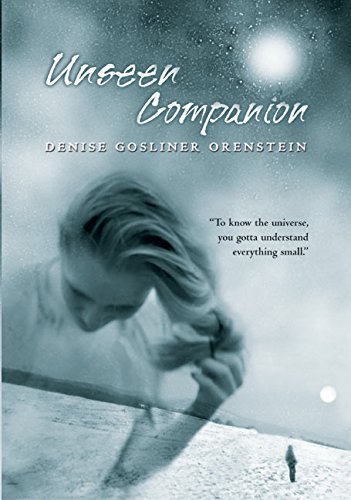 In the late 1960's, in the small community of Bethel, Alaska, a beaten teenager named Dove Alexie is in prison. One day, he mysteriously vanishes, and curiously, there is no mention of hi s arrival or departure on the prison records. Four young people in Bethel tell their stories, and the narrative circles around Dove – their unseen companion.

Told with humour and insight, Unseen Companion spins together four unique voices that capture the complexities of human existence and the search for one's place in the universe.

o Based on the author's own experiences living and doing social work in fourteen Alaskan bush villages, which left Orenstein uniquely qualified to write the kind of loss and hopelessness presented in this novel.

o An intriguing and layered narrative structure, unique voices, and a brilliant over–arching metaphor that sums up one's place in the universe make this a unique and resonant book that will stick with readers for years to come.

Denise Gosliner Orenstein is the author of three novels and currently holds the position of Director, American University MFA Program in Creative Writing in Washington, D.C. She is also a writing mentor for the PEN American Center Prison Writing Project and a participant in the PEN/Faulkner Writers in Schools Program. She lives with her two daughters in Washington, D.C.

*Starred Review* Gr. 10-12. In this kaleidoscopic first-person novel, set in 1968 and 1969, the point of view shifts from one Alaskan teenager to another. Each contributes something to the shadowy portrayal of the novel's central, tragic figure, Dove Alexie, a 16-year-old "mixed-breed" who was imprisoned for striking a white teacher, beaten by his racist jailer, and lost in the system until the story's end. The narrators are two Gussak (Caucasian) girls who live with their single-parent families in Bethel, Alaska, and a Yup'ik (native Alaskan) girl and boy sent away from their communities to live in a boarding school. Though their tales revolve around pivotal questions concerning Dove's history and his fate, it is their own lives that are more sharply in focus and fully developed here. In distinctive voices, the four narrators tell their own involving stories, separate from each other at the beginning, but increasingly interconnected. Hope, love, and occasional humor provide welcome relief from the sadness and despair that pulse through the characters' lives as they deal with separation, anger, alienation, blackmail, rape, and death. Slowly the pieces of narrative fall into place to form an intricately patterned mosaic. The appended glossary defines Alaskan terms. A sensitive observer and a compelling storyteller, Orenstein offers a novel that is both touching and harsh. Carolyn Phelan
Copyright © American Library Association. All rights reserved