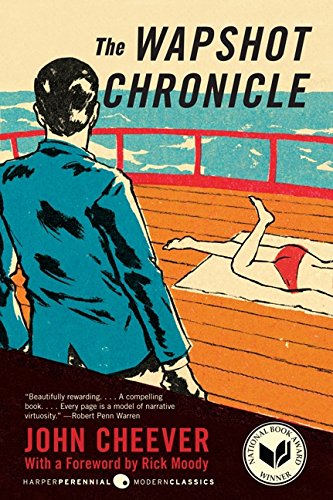 Based in part on Cheever’s adolescence in New England, the novel follows the destinies of the impecunious and wildly eccentric Wapshots of St. Botolphs, a quintessential Massachusetts fishing village. Here are the stories of Captain Leander Wapshot, venerable sea dog and would-be suicide; of his licentious older son, Moses; and of Moses’ adoring and errant younger brother, Coverly. Tragic and funny, ribald and splendidly picaresque, The Wapshot Chronicle is a family narrative in the tradition of Trollope, Dickens, and Henry James.

John Cheever, best known for his short stories dealing with upper-middle-class suburban life, was born in Quincy, Massachusetts, in 1912. Cheever published his first short story at the age of seventeen. He was the recipient of a 1951 Guggenheim Fellowship and winner of a National Book Award for The Wapshot Chronicle in 1958, the 1979 Pulitzer Prize for Fiction for The Stories of John Cheever, the National Book Critics Circle Award, and an American Book Award. He died in 1982, at the age of seventy.