Items related to Rough Edges: My Unlikely Road from Welfare to Washington

Rough Edges: My Unlikely Road from Welfare to Washington 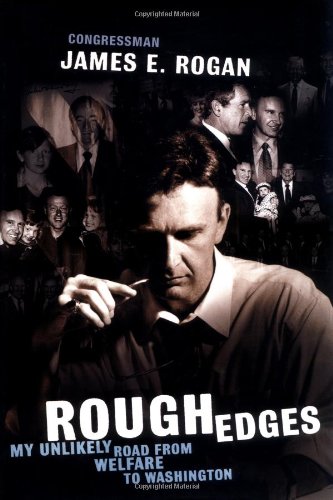 Jim Rogan was born to a single mother—a cocktail waitress who was later convicted of welfare fraud; his bartender-father abandoned them both before he was born. After a rough-and-tumble childhood in San Francisco's hardscrabble Mission District—where he was raised by his colorful extended family—he became a political junkie at the age of nine, and once received help with his homework from Harry Truman. But Rogan traveled with a tough circle of friends; after years of borderline delinquency he was expelled from high school, became a porn theater bouncer, and then a bartender at a strip joint and a Hell's Angels bar. Along the way, a young Arkansas politician advised him to study law and become a member of a different kind of bar.

In time Rogan scrapped his way through college and law school. He was appointed a Los Angeles County DA, prosecuting members of the notorious Crips and Bloods gangs; then became a judge, a state legislator, and finally a congressman from Southern California. And in 1998, as a Republican member of the House Judiciary Committee, he found himself prosecuting the impeachment of the President of the United States—Bill Clinton, the same Arkansas politician who advised him to go into law and politics two decades earlier.

Rough Edges is a rarity among Washington tales: full of outrageous stories, wild humor, pull-no-punches candor, and downright fun. Replete with character and characters, and told in Rogan's engaging and unswervingly frank voice, Rogan's story is certainly the most freewheeling—and perhaps the most honest—political memoir ever written.

James E. Rogan was until recently undersecretary of commerce and director of the United States Patent and Trademark Office in the Bush administration. From 1997 to 2001 he was a member of Congress -- a conservative Republican representing a liberal Democratic district that included many Hollywood movie studios. Before that he was majority leader of the California State Assembly, a state court judge, and a gang-murder prosecutor in Los Angeles County. Accepting the assignment by the United States House of Representatives in 1998 to help prosecute the impeachment trial against President Clinton led to Rogan's reelection defeat in 2000. He now lives in Southern California, and is currently a partner at the law firm of Venable LLP in Washington, D.C. He will open Venable's West Coast office in the summer of 2004.

The Congressional rogue is an ancient character in Washington folklore, dating back at least to Matthew Lyon, the Vermont Republican who publicly expectorated on the Federalist Roger Griswold in 1798, interpreting the First Amendment a bit too literally for most people's taste. (Griswold responded to this act of self-expression with one of his own -- caning Lyon on the floor of the House.) Ah, the good old days -- when the parties really hated each other.

A modern heir to the tradition is former California congressman James Rogan, also a former under secretary of commerce, and a footnote to the 1990s as one of the 13 House managers of impeachment. Unlike most people who scrape their way to Washington and then frantically reinvent themselves, Rogan -- to his credit -- spends most of this book celebrating his hardscrabble past. Born to a cocktail waitress and a bartender who refused to acknowledge James as his own, Rogan grew up in a series of tough neighborhoods, beginning with San Francisco's Mission District, where he was taken in as the ward of a tough stevedore grandfather. A log cabin would have seemed luxurious in comparison.

These early scenes, with their honest appraisal of the hardships of the inner city, and the boy's unconditional love for his grandfather, read decently and on occasion are genuinely moving. The problems for young Rogan, and for his readers as well, begin with the death of his grandfather on page 27. What ensues is a long and meandering narrative in which Rogan gets into some tough scrapes, slugs it out through school and an early bartending career, and eventually figures out his future. There are some entertaining reflections on wayward friends, and Rogan's mordant sarcasm lifts a narrative that otherwise would not be as fascinating as his publicists seem to find it.

One theme that will resonate with a Washington audience is Rogan's early obsession with political memorabilia -- he must have been the only child in America who fell hard for Hubert Humphrey, and he wrote to politicians for their autographs. An early sign of his future orientation comes during a moment of considerable poetic license, when he remembers the young Republicans at the 1972 Convention (he attended as a 14-year-old) as "young, hip and fun." But as with so many morality plays, the best moments are the naughty ones, and the book loses a lot of steam as he discovers Christianity through the unlikely vehicle of the Chuck Colson tapes he listened to while jogging. Lengthy sections on his legal career do not help, and a couple of errors mar the narrative (Thomas Jefferson never served in Congress, for example).

Then, at the very end of the book, something strange happens. After breathlessly pointing us toward what he and his publicists brag about as his great moment of conscience -- his decision to become a House manager during the dark days of impeachment -- Rogan ends the book with a gigantic whimper and no discussion of any of these matters, except a fleeting promise to describe his brief congressional career in a future volume. That is a shame, because readers deserve to know why he turned against Clinton, who had generously counseled the young Rogan when he came looking for advice on how to start a political career. It's like one of those vaudeville shows where the cast sneaks out before the final number so they don't have to refund the audience's money.

It is regrettable also because a more introspective Rogan could have shed light on a number of important issues, beginning with the toxic relations between the parties. He was raised a Democrat, but for reasons that he only hints at (an early dislike for hippies, amusingly rendered in an account of one of his cousin's boyfriends, and a curious obsession with Al Jolson), his cultural values drew him increasingly to the Republicans in the 1980s. A more probing examination of his decision to jump ship might have served Democrats and Republicans alike, especially in the current electoral climate, when swing voters are worth their weight in gold. But instead Rogan, like one of the gang members he prosecutes, instantly starts parroting the slogans and behavioral tics of the new organization he has joined, without going into thoughtful detail about the switch.

An honest assessment of the abortion debate would have been especially welcome. A gruesome early scene describes the back-alley abortion his mother was about to undergo after learning of her pregnancy, before running away from the horror of the operation -- and thereby sparing his life. One could find in that episode rather strong support for both the pro-life and pro-choice positions, but Rogan shies away from serious discussion. He includes some snide information about the parties in an appendix that it would be charitable to call awkward but never reflects meaningfully on the Democratic Party that sustained his grandfather throughout his life, and did far more to protect working men than Republicans ever will. A particularly odd moment occurs on page 226, when Rogan claims the GOP as the party of "minorities, the elderly, and the poor," immediately after describing welfare recipients as "bums needing a swift kick." An agent apparently told Rogan not to talk too much about the political parties because so many publishers are "liberal Democrats." But the last time I checked, HarperCollins was owned by Rupert Murdoch, and Regan Books was the home of bestselling books by Sean Hannity, Robert Bork and other right-wing luminaries. Might be time to fire that agent.
Copyright 2004, The Washington Post Co. All Rights Reserved.

1. Rough Edges: My Unlikely Road from Welfare to Washington

2. Rough Edges: My Unlikely Road from Welfare to Washington

3. Rough Edges: My Unlikely Road from Welfare to Washington

4. Rough Edges: My Unlikely Road from Welfare to Washington