Items related to Because I Said So: 33 Mothers Write About Children,...

Moses, Kate; Peri, Camille Because I Said So: 33 Mothers Write About Children, Sex, Men, Aging, Faith, Race, and Themselves

Because I Said So: 33 Mothers Write About Children, Sex, Men, Aging, Faith, Race, and Themselves 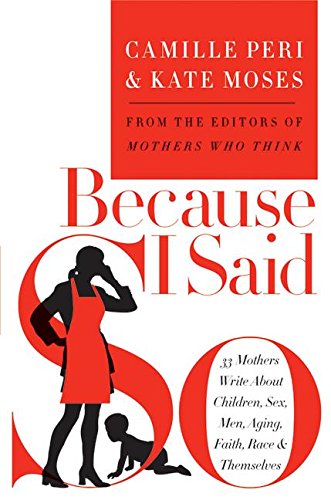 In June 1997, Camille Peri and Kate Moses launched the daily website Mothers Who Think on Salon.com for women who, like themselves, were starved for smart, honest stories about motherhood -- personal and intimate stories that went beyond tantrum control and potty training to grapple with the profound issues that affect women and their children. Like the online site, their bestselling, American Book Award-winning anthology Mothers Who Think struck a nerve across the country not just with mothers, but with all those who shared a vested interest in the raising of the next generation.

Because I Said So gives readers even more to think about. This new collection of fiercely honest essays edited by Peri and Moses captures the challenges of motherhood in the twenty-first century as no other book has. Writers such as Janet Fitch, Mariane Pearl, Mary Roach, Susan Straight, Margaret Talbot, Rosellen Brown, Beth Kephart, Ariel Gore, and Ana Castillo delve into the personal and the political, giving passionate expression to their relationships with their children and to their evolving sense of themselves. Provocative, candid, witty, and wise, their stories range from the anguish of giving up child custody to the guilt of having sex in an era of sexless marriages; from learning to love the full-speed testosterone chaos of boys to raising girls in a pervasively sexualized culture; from facing racial and religious intolerance with your children to surviving cancer and rap simultaneously.

Told in prose that is as unabashedly frank as it is lyrical, this is the collective voice of real mothers -- raised above the din -- in all their humor, anger, vulnerability, grace, and glory.

Kate Moses is a former contributing writer for Salon.com and one of the founding editors of Salon's Mothers Who Think. She is also the author of Wintering: A Novel of Sylvia Plath, winner of the Janet Heidinger Kafka Prize, as well as coeditor, with Camille Peri, of Mothers Who Think: Tales of Real-Life Parenthood. She lives in San Francisco with her husband and two children.

Camille Peri was a founding editor of the Mothers Who Think website at Salon.com and coeditor, with Kate Moses, of the American Book Award–winning anthology Mothers Who Think: Tales of Real-Life Parenthood. She lives in San Francisco with her husband and two sons.

Moses and Peri, who edited Mothers Who Think, an American Book Award–winning anthology based on a Salon.com column, have gathered some 33 talented mothers (including writers Rosellen Brown, Janet Fitch, Ayelet Waldman and Ann Hulbert, among others) discussing aspects of "real motherhood" today. True, most of their issues—spousal abuse, divorce, cancer, step-parenting, single mothering—aren't new. Some contributors, like Mariane Pearl, the widow of journalist Danny Pearl, have even published their thoughts elsewhere. What's magical about this collection, though, is what happens when such diverse accounts are stitched together in a single volume: a new picture emerges of what it means to be a mother in modern America. Chemo treatments may leave you bald. Your kids may suffer from "KGOY—kids growing older younger," and as they test your limits, you may find yourself "morphing into some authoritarian freak." If you're black, people may assume you're your own child's nanny. But as one woman discovered traveling solo to Cairo to see a particular set of Roman-era memorial portraits in the Egyptian Museum, the acknowledgment "of death, of loss, of suffering, as well as of desire and remembered joy" is all "part of living." Skip the flowers and candy this Mother's Day, and buy this book instead. Agent, Ellen Levine. (May 1)

1. Because I Said So 33 Mothers Write About Children, Sex, Men, Aging, Faith, Race, and Themselves

2. Because I Said So: 33 Mothers Write About Children, Sex, Men, Aging, Faith, Race, and Themselves

3. Because I Said So: 33 Mothers Write About Children, Sex, Men, Aging, Faith, Race, and Themselves

4. Because I Said So: 33 Mothers Write About Children, Sex, Men, Aging, Faith, Race, and Themselves Moses, Kate and Peri, Camille