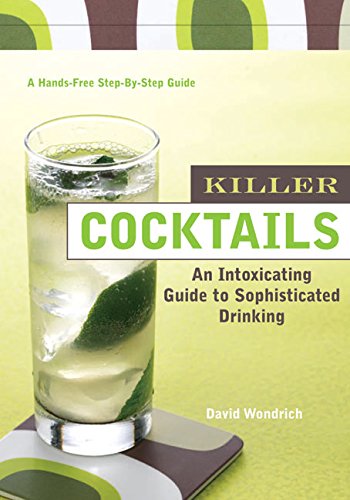 Killer Cocktails is a unique hands-free, stand-up guide with all the advice and guidelines you need to set up a home bar and learn the art of mixing cocktails the right way. The drinks you'll find in here avoid novelty products, artificial flavors, and colors not found in nature. They're heavy on tradition and light on trendiness. You also might learn a thing or two, from the origins of the John Collins (no Toms, Dicks, or Harrys here) to why the Daiquiri should be resurrected from its status as the wimp of all cocktails (it was JFK's fave, after all).

And that's not all. While respecting the traditions of balance and simplicity that our mixological forefathers founded, Killer Cocktails also shows you how to be creative. First you master the basics and only then can you start substituting vanilla vodka for rum, or rhubarb for raspberry. But if you're simply in the mood for a Rye Old-Fashioned, the real recipe is right here.

David Wondrich is one of the nation's foremost authorities on the history of the cocktail (okay, there's not a lot of competition, but still). A former English professor, he gave up Shakespeare and Freshman Comp to write for Esquire magazine (where he is a contributing editor) and numerous other publications, including Saveur, Gotham, Wine and Spirits, Drinks, and The Snail, the newsletter of Slow Food America. His first book, Esquire Drinks: An Opinionated & Irreverent Guide to Drinking, has been called "a must-have for anyone who enjoys a first-class cocktail" (The Dallas Morning News). Dr. Wondrich is a founding member of the Museum of the American Cocktail, which will open in New Orleans in January 2005. He lives in Brooklyn.