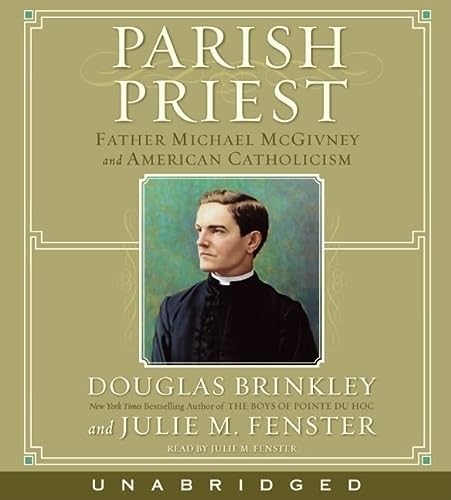 Father Michael McGivney was a man to whom "family values" represented more than mere rhetoric, a man who has left a legacy of hope still celebrated around the world.

In the late 1800s, discrimination against American Catholics was widespread. Called to action in 1882, Father McGivney founded the Knights of Columbus, an organization that helped to save countless families. It has since grown to an international membership of 1.7 million men. At heart, though, Father McGivney was never anything more than an American parish priest, and nothing less than that, either.

In an incredible work of academic research, Douglas Brinkley and Julie M. Fenster re-create the life of Father McGivney, a fiercely dynamic and yet tenderhearted man. Moving and inspirational, Parish Priest chronicles the process of canonization that may well make Father McGivney the first American-born parish priest to be declared a saint by the Vatican.

Douglas Brinkley is the Katherine Tsanoff Brown Chair in Humanities and Professor of History at Rice University, a CNN Presidential Historian, and a contributing editor at Vanity Fair.  In the world of public history, he serves on boards, at museums, at colleges, and for historical societies. The Chicago Tribune dubbed him “America’s New Past Master.” The New-York Historical Society has chosen Brinkley as its official U.S. Presidential Historian. His recent book Cronkite won the Sperber Prize, while The Great Deluge: Hurricane Katrina, New Orleans, and the Mississippi Gulf Coast received the Robert F. Kennedy Book Award. He was awarded a Grammy for Presidential Suite and is the recipient of seven honorary doctorates in American studies. His two-volume, annotated Nixon Tapes recently won the Arthur S. Link–Warren F. Kuehl Prize. He is a member of the Century Association, the Council on Foreign Relations, and the James Madison Council of the Library of Congress. He lives in Austin, Texas, with his wife and three children.

This life of Michael McGivney, a nineteenth-century Connecticut priest who was founder of the Knights of Columbus and is now in line for sainthood, is almost hagiography. It is unquestioningly pious, obsequiously respectful. The writing and reading (by co-author Fenster) are of a piece: earnest, plodding, and sometimes maladroit, with inept word choices in the writing and wrong emphases in the reading. Fenster hesitates, stumbles, or tacks phrases onto seemingly completed sentences, many of which end with a misplaced rising inflection. In trying to vary her tone and lend it animation, she sounds like a Sunday school teacher trying to hold the attention of young students. W.M. © AudioFile 2006, Portland, Maine-- Copyright © AudioFile, Portland, Maine