Items related to 747: Creating the World's First Jumbo Jet and Other...

Sutter, Joe; Spenser, Jay 747: Creating the World's First Jumbo Jet and Other Adventures from a Life in Aviation

747: Creating the World's First Jumbo Jet and Other Adventures from a Life in Aviation 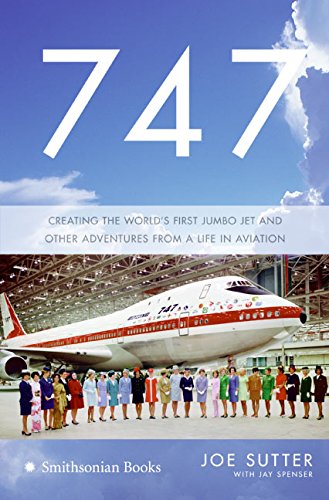 747 is the thrilling story behind "the Queen of the Skies" -- the Boeing 747 -- as told by Joe Sutter, one of the most celebrated engineers of the twentieth century, who spearheaded its design and construction.

Born in 1921 in Seattle, Sutter grew up on a hilltop overlooking the Boeing plant and flying field. It was a thrilling era of open cockpits, silk scarves, leather helmets, and goggles. After serving in World War II, Sutter joined Boeing, then a small company, eager to build airplanes.

In July 1965, he was asked to lead the large Boeing team designing the new 747. Pan Am wanted a new airliner as quickly as possible. This all-new transport had to be far bigger than anything in service or even on anybody's drawing board. To make it fly, Sutter and his team would have to push far beyond the technological boundaries of the late 1960s. Could it be done?

Almost everything about the 747 would be unprecedented. Its cabin would be so wide that it would need two aisles. Its horizontal tail would be bigger than the wings of most airliners ever built. Jet engines big enough to lift it off the ground didn't yet exist. Runways at the world's airports couldn't handle it, and neither could Boeing's factories. They had to erect the world's largest building just to produce it. A truly mammoth undertaking, the 747 became one of the most successful airplane models ever.

Sutter's vivid narrative takes us back to a time when American technology was cutting-edge -- the 747 came on the market the same year that men first set foot on the moon -- and jet travel was still glamorous and new. With wit and warmth, he gives an insider's sense of the larger-than-life-size personalities -- and the tensions -- in the aeronautical world. Ultimately, 747 is an inspiring story of grit and glory.

Joe Sutter led the team of engineers that created the Boeing 747. He served on the Presidential Commission to investigate the Challenger explosion with Neil Armstrong, Sally Ride, and Richard Feynman. Now in his eighties, he still serves as a consultant to Boeing. He lives in Seattle.

As leader of the Boeing company's design and engineering team that created the 747—the world's first wide-body, twin-aisle airplane—Sutter had perhaps the best overall view of all aspects of the 747's development in the mid 1960s. This engaging look at the technical, political and corporate forces that clashed over the 747 adds important details to Clive Irving's 1993 Wide-Body: The Triumph of the 747. Sutter's descriptions of the furious pace his team had to maintain proves his assertion that the 747's development process closely resembled that of aviation's colorful early days. It is fascinating to read that while the 747 later became Boeing's crowning achievement, with variations of the plane continuing to remain popular during the past three decades, various Boeing executives during the '60s "were taken in by the enticing vision" of supersonic transports like the Concorde, and Sutter had to fight "every step of the way to get the 747 designed, built, certified, and into service." 8-page b&w photo insert, 20 b&w photos throughout, not seen by PW. (June)
Copyright © Reed Business Information, a division of Reed Elsevier Inc. All rights reserved.

1. 747: Creating the World's First Jumbo Jet and Other Adventures from a Life in Aviation Sutter, Joe and Spenser, Jay