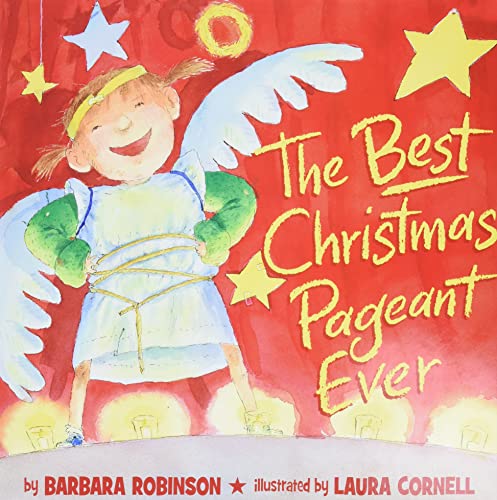 Meet the Herdmans—they lie, cheat, and love to give clonks on the head. They are, without a doubt, the worst kids in the history of the world. So no one is prepared when this outlaw family invades church one Sunday and decides to take over the annual Christmas pageant.

None of the Herdmans has ever heard the Christmas story before. Joseph, Mary, the baby Jesus—it’s all news to them. So they’re convinced that the Wise Men should bring pizza and that the Angel of the Lord is straight out of a comic book. Everyone worries that this year’s pageant will be horrible (just like the Herdmans!), but they are sure to make it the most unusual anyone has seen and, just possibly, the best one ever.

Adapted from the beloved novel of the same name, this sparkling picture-book version is perfect for younger children. They will delight in the antics of the terrible Herdmans, who surprise everyone when they capture the true meaning of Christmas.

The horrible Herdmans are the meanest kids around. They lie, steal, cuss, and smoke cigars---even the girls. The last place anyone expected to see them is in church. So when the Herdmans storm Sunday school and take over the annual Christmas pageant, everyone braces for the worst. But no one is prepared for what really happens when the rottenest kids in the world take over the greatest story ever told. It's a pageant full of surprises for everyone--including the Herdmans themselves.

Barbara Robinson has written several popular books for children, including My Brother Louis Measures Worms, The Best School Year Ever, The Best Halloween Ever, and the enormously popular bestselling novel The Best Christmas Pageant Ever, first published in 1972, which was made into a classic TV movie and on which this book was based. The play The Best Christmas Pageant Ever is produced annually in theaters, schools, and churches all over the world. Ms. Robinson has two daughters and three grandchildren.

Laura Cornell lives in New York City with her daughter, Lily (first and only), but they spend much time in California, Laura's first state in her first home. She was asked to illustrate Jamie's first book, and that became ten. Lucky is the first word that comes to mind.