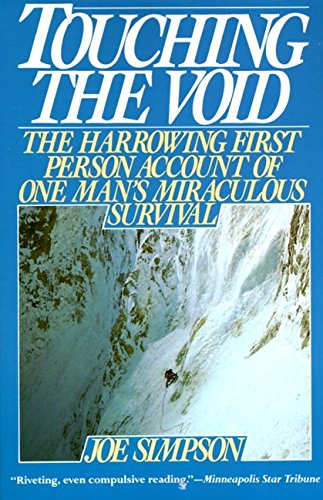 "A truly astounding account of suffering and fortitude."
--The Times (London)

Joe Simpson and his climbing partner, Simon Yates, had just reached the top of a 21,000-foot peak in the Andes when disaster struck. Simpson plunged off the vertical face of an ice ledge, breaking his leg. In the hours that followed, darkness fell and a blizzard raged as Yates tried to lower his friend to safety. Finally, Yates was forced to cut the rope, moments before he would have been pulled to his own death.

The next three days were an impossibly grueling ordeal for both men. Yates, certain that Simpson was dead, returned to base camp consumed with grief and guilt over abandoning him. Miraculously, Simpson had survived the fall but, crippled, starving, and severely frostbitten, was trapped in a deep crevasse. Summoning vast reserves of physical and spiritual strength, Simpson hopped, hobbled, and crawled over the cliffs and canyons of the Andes, reaching the base hours before Yates had planned to break camp.

How both men overcame the torments of those harrowing days is an epic tale of fear, suffering, and survival; a poignant testament to unshakable courage and friendship.

"Told with lyrical quality and stunning immediacy, Touching the Void transcends its genre and becomes accessible to readers who have never had any desire to climb a glacier."
--New York Newsday

"Simpson touches a nerve of the mountaineering community and the hearts of others."
--Los Angeles Times

Review:
Concise and yet packed with detail, Touching the Void, Joe Simpson's harrowing account of near-death in the Peruvian Andes, is a compact tour de force that wrestles with issues of bravery, friendship, physical endurance, the code of the mountains, and the will to live. Simpson dedicates the book to his climbing partner, Simon Yates, and to "those friends who have gone to the mountains and have not returned." What is it that compels certain individuals to willingly seek out the most inhospitable climate on earth? To risk their lives in an attempt to leave footprints where few or none have gone before? Simpson's vivid narrative of a dangerous climbing expedition will convince even the most die-hard couch potato that such pursuits fall within the realm of the sane. As the author struggles ever higher, readers learn of the mountain's awesome power, the beautiful--and sometimes deadly--sheets of blue glacial ice, and the accomplishment of a successful ascent. And then catastrophe: the second half of Touching the Void sees Simpson at his darkest moment. With a smashed, useless leg, he and his partner must struggle down a near-vertical face--and that's only the beginning of their troubles.
From the Publisher:
5 1.5-hour cassettes

TOUCHING THE VOID : The Harrowing First Person Account of One Man's Miraculous Survival

TOUCHING THE VOID : The Harrowing First Person Account of One Man's Miraculous Survival

TOUCHING THE VOID: THE HARROWING