Items related to Let Us Begin Anew: An Oral History of the Kennedy Presidency

Let Us Begin Anew: An Oral History of the Kennedy Presidency 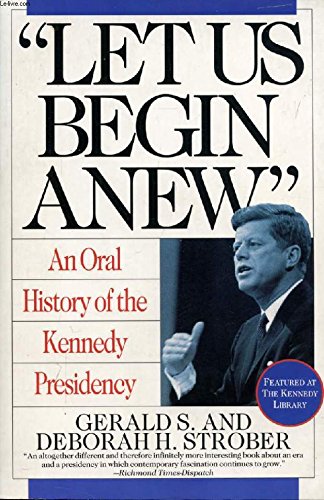 Provides an insider's account of the Kennedy administration by cabinet members, aides, and others

An engaging potpourri of oral reminiscences of the Kennedy Administration, many of them from insiders. Gossip about Camelot will always have a market, and this collection has plenty to hold the Kennedy-buff's attention. Lengthy special-pleading from Adlai Stevenson III, Norman Podhoretz, and a Batista supporter sits cheek-by-jowl with succinct observations by J.K. Galbraith and Walter Rostow. The Strobers (he: American Jews, etc.--not reviewed; she: a Newsweek editor) organize their material into 22 topics ranging from the 1960 campaign, Kennedy's political philosophy, and the Bay of Pigs fiasco to the problem of J. Edgar Hoover and the subtle ambiguities of the Kennedy-Johnson relationship. The 120 interviews include talks with Khrushchev's son; Willy Brandt; Bui Diem (former South Vietnamese ambassador to the US; and other international figures--but the more interesting discourse comes from those inside the Kennedy Administration and those who worked with it (Dean Rusk, George McGovern, William Colby, et al.) The infighting about--and post-mortems of--the Bay of Pigs are especially interesting as the participants highlight the problems Kennedy faced as he took office: vulnerability to accusations from expert Red-baiter Nixon (who knew about the Bay of Pigs plan) if he failed to act; bad advice from the Joint Chiefs of Staff; CIA incompetence and deception; and a scenario by which JFK was led into the invasion by hawks, who assumed that he would commit air support (even though the President had said he would not). A year later, by contrast, the now-more experienced Kennedy used his advisors effectively and acted with dispatch in the Cuban Missile Crisis. A fertile historical document of wildly divergent views (especially on Kennedy's ``rating'' as a President)--and long- lasting personal enmities. -- Copyright ©1993, Kirkus Associates, LP. All rights reserved.

Based on more than 120 interviews conducted from 1989 to 1992, this "oral history" is a sometimes enlightening, more often frustrating attempt to recount, not analyze, Kennedy's presidency. Gerald S. Storber ( American Jews: Community in Crisis ) and his wife, Deborah H. Strober, editor of Newsbreak , organize their material in rough chronological order, beginning with the 1960 campaign, proceeding to Kennedy's political philosophy and Cabinet appointments, and considering crises like Vietnam and the Bay of Pigs. Their interviewees are mainly former Washington insiders, like Abraham Ribicoff, Pierre Salinger and Adlai Stevenson III. Such activists as the Rev. William Sloane Coffin Jr. and John Lewis, chairman of the Student Non-Violent Coordinating Committee, are also heard from, as are Soviet foes like Khruschev's son-in-law Alexei Adzhubei, the former editor of Izvestia. There are potent reminiscences: then national security adviser Walt Rostow remembers how Kennedy felt death was near and always sought excellence; Commentary editor Norman Podhoretz criticizes Arthur Schlesinger Jr., the president's special adviser, as Kennedy's "apologist"; John Seigenthaler, then administrative assistant to the attorney general, remembers how Robert F. Kennedy, unlike his older brother, the president, was "willing to be vulnerable." While the book is hardly hagiographic--interviewees are divided on Kennedy's legacy--it sufers from its format: the Strobers do not explain how the opinions and reflections gathered here compare to or otherwise illuminate the public record. Author tour.
Copyright 1993 Reed Business Information, Inc.

1. Let Us Begin Anew": An Oral History of the Kennedy Presidency

2. Let Us Begin Anew: An Oral History of the Kennedy Presidency