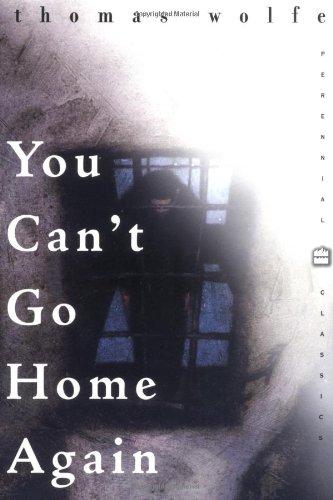 George Webber has written a successful novel about his family and hometown. When he returns to that town he is shaken by the force of the outrage and hatred that greets him. Family and friends feel naked and exposed by the truths they have seen in his book, and their fury drives him from his home. He begins a search for his own identity that takes him to New York and a hectic social whirl; to Paris with an uninhibited group of expatriates; to Berlin, lying cold and sinister under Hitler's shadow. At last Webber returns to America and rediscovers it with love, sorrow, and hope.

"If there stills lingers and doubt as to Wolfe's right to a place among the immortals of American letters, this work should dispel it."
--Cleveland News

"Wolfe wrote as one inspired. No one of his generation had his command of language, his passion, his energy."
--The New Yorker

"You Can't Go Home Again will stand apart from everything else that he wrote because this is the book of a man who had come to terms with himself, who has something profoundly important to say."
--New York Times Book Review

Review:
This novel was the last Thomas Wolfe finished before his untimely death at age 37. In its brilliance, we find more cause to wish he had lived longer. As with his other novels, You Can't Go Home Again is an extremely personal work, but in the character of George Webber, a writer, Wolfe sees and captures America and the world in an dramatic time in history. The time is the period just before the great stock market crash and it stretches through the Depression and into Germany during the rise of Nazis. And the writer of course is Wolfe, who takes us on a ride through America never seen before--one with sharp insight and breathtaking flair.
About the Author:

One of the most important American writers of his generation, Thomas Wolfe (1900-1938) was born in Asheville, North Carolina. His other novels include Of Time and the River and Look Homeward, Angel.