Items related to Thank You, Jeeves (A Jeeves and Bertie Novel)

Thank You, Jeeves (A Jeeves and Bertie Novel) 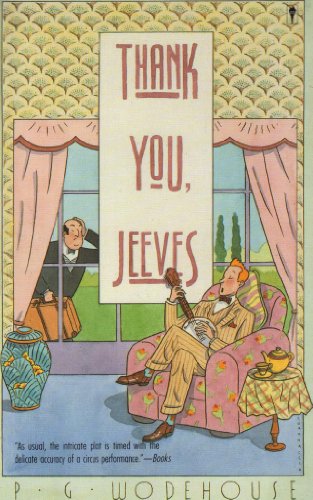 A humorous novel in which Bertie Wooster seeks refuge in Lord Chuffington's cottage, but the peace is soon shattered with the arrival of an ex-fiancee, Pauline Stoker, and her father. From the author of RING FOR JEEVES and JOY IN THE MORNING.

PELHAM GRENVILLE WODEHOUSE (1881-1975), an England-born journalist and novelist, lived in several different countries before settling in the United States after WWII. In a career spanning over 60 years, he wrote more than ninety books. During the 1920s, Wodehouse collaborated with Broadway legends like Cole Porter and George Gershwin on musicals, and in the 1930s, he expanded his repertoire by writing for motion pictures. He was honored with a knighthood in 1975.

Jonathan Cecil gives a sparkling performance of this classic piece of Wodehouse humor. Cecil's Jeeves speaks with the great dignity and classic accent one expects of the ideal valet. In contrast, Cecil performs Bertie with all the winsome frivolity due to the fictional aristocrat. Cecil maintains perfect distinction of these characters even during extended dialogues and adds characters with American accents when the attractive Pauline and her protective father appear on the scene. Wodehouse's confection of muddled engagements and provoked musicians is perfectly narrated. R.F. © AudioFile 2005, Portland, Maine-- Copyright © AudioFile, Portland, Maine

1. Thank You, Jeeves (A Jeeves and Bertie Novel)

2. Thank You, Jeeves (A Jeeves and Bertie Novel)