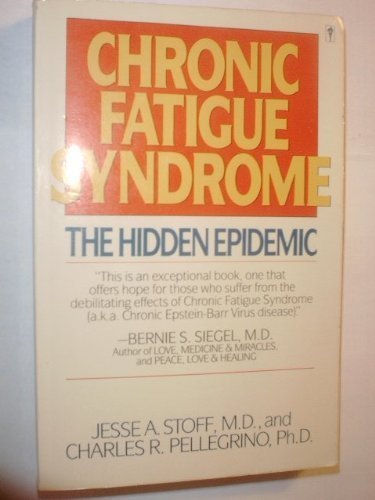 Difficult to diagnose, impossible to "cure," Chronic Fatigue Syndrome (CFS) appears to be a modern medical nightmare-come-true for a growing number of victims. A disorder known by names ranging from "Raggedy Ann Syndrome" to Chronic Epstein-Barr Virus disease, CFS strikes with the following devastating symptoms:

Now there is hope for CFS sufferers. Jesse A. Stoff, M.D., has helped hundreds of CFS patients such as Charles R. Pellegrino, Ph.D., to achieve apparently permanent remission of the syndrome with a comprehensive program aimed at strengthening the immune system. Chronic Fatigue Syndrome: The Hidden Epidemic is a combination of Dr. Stoff's advice and Charles Pellegrino's example as an "exceptional patient." It points the way for CFS sufferers to achieve a true healing of body and mind.

Dr. Jesse A. Stoff is a graduate of New York Medical College and specializes in a holistic approach to treating people with severe and/or chronic diseases. He is the medical director of a very large multidisciplinary holistic health center in Tucson, Arizona. He also co-edits the Journal of Anthroposophical Medicine. He lectures internationally on anthroposophical and homeopathic medicine, a field in which he holds a specialty board licensure and has published in various national and international medical journals. In 1986 and 1989 he received a physician recognition award from the American Medical Association and was a guest on the AMA television program "Medical Rounds." He has written several articles and two previous books with Dr. Pellegrino on the subject of evolutionary biochemistry. Dr. Stoff is an avid gardener, collector of rocks and minerals, an an amateur photographer. He also enjoys playing the bagpipes.

Starting with an impaired immune system, Chronic Fatigue Syndrome (CFS), we're shown here, poses a diagnostic dilemma because of its multilevel combination of symptomsarthritis, mononucleosis, anemia and extreme tiredness, often accompanied by depression and erosion of the will. According to Stoff, a Massachusetts viral-infection specialist, the complexity of CFS (previously called Epstein-Barr virus) demands a comprehensive, holistic approach to diagnosis and treatment. Following a semi-technical section on CFS's pathology, Stoff and Pellegrino provide guidelines for both physicians and patients. Stoff claims his therapy has been effective with his patients, among them coauthor, friend and astrobiologist Pellegrino. Stoff uses not only traditional drugs, nutrition and exercise, but non-traditional techniques as well, such as vitamins, homeopathy and affirmative mental exercises (including visualization) that are designed to fortify the will and the immune system. The authors make accessible to lay readers a complex medical problem and offer realistic hope to CFS sufferers. Author tour.
Copyright 1988 Reed Business Information, Inc.