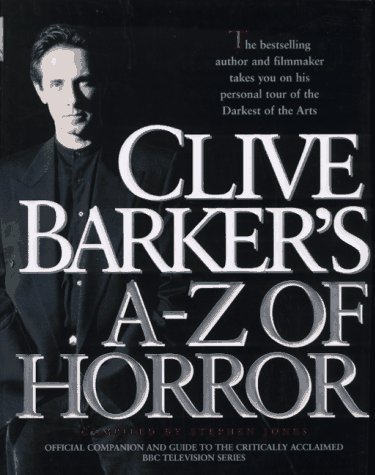 An illustrated volume compiled from the BBC television miniseries offers a personal tour of the real stories and people who inspired Barker's work, from serial killers and rebel artists to legendary monsters and Hollywood stars.

This splashy, high-concept book with glossy pages (designed to accompany a BBC-TV series) is not so much an encyclopedia, as a color scrapbook of Clive Barker's horror obsessions. After an introduction in which Barker examines such questions as "What is horror?" and "Why does it fascinate us?," the book takes the form of 26 heavily illustrated historical essays about assorted topics in the genre--one for each letter of the alphabet (e.g., "B is for Beelzebub"). The pictures include numerous paintings and drawings by Barker, stills from movies, movie posters, author/director bio inserts, and photographs of all types. A partial list of the topics covered: serial killers, H. P. Lovecraft, Dennis Wheatley, John Carpenter, H. R. Giger, Grand Guignol, makeup, killer clowns, killer kids, body horror, Japanese monsters, Barbara Steele, Shirley Jackson, fairy tales, and sculptor Franz Messerschmidt. A fun toy for horror buffs!

Stephen Jones is the winner of three World Fantasy Awards, three International Horror Guild Awards, four Horror Writers Association Bram Stoker Awards, and eighteen British Fantasy Awards, and has also been nominated for a Hugo Award. One of Britain's most acclaimed horror and dark fantasy writers and editors, he has nearly one hundred books to his credit, including Stardust: The Visual Companion, Creepshows: The Illustrated Stephen King Movie Guide, The Essential Monster Movie Guide, Clive Barker's A-Z of Horror, and the poetry volume Now We Are Sick: An Anthology of Nasty Verse, coedited with Neil Gaiman. Jones lives in London.