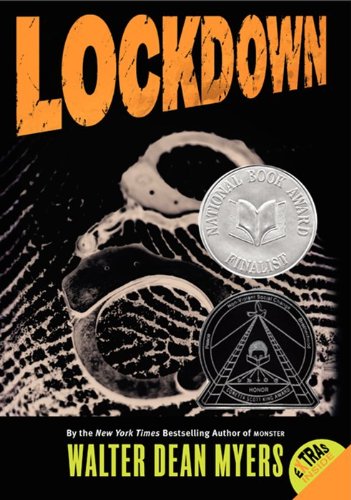 Walter Dean Myers enjoys speaking with kids in schools and juvenile detention facilities about writing and making positive decisions. He says, "I have enormous faith in young people."

What's it like in juvie jail? Enter the world of fourteen-year-old Reese, who's locked up at Progress juvenile detention facility. Can he get a second chance?

Walter Dean Myers was the New York Times bestselling author of Monster, the winner of the first Michael L. Printz Award; a former National Ambassador for Young People's Literature; and an inaugural NYC Literary Honoree. Myers received every single major award in the field of children's literature. He was the author of two Newbery Honor Books and six Coretta Scott King Awardees. He was the recipient of the Margaret A. Edwards Award for lifetime achievement in writing for young adults, a three-time National Book Award Finalist, as well as the first-ever recipient of the Coretta Scott King-Virginia Hamilton Award for Lifetime Achievement.

Myers takes readers inside the walls of a juvenile corrections facility in this gritty novel. Fourteen-year-old Reese is in the second year of his sentence for stealing prescription pads and selling them to a neighborhood dealer. He fears that his life is headed in a direction that will inevitably lead him “upstate,” to the kind of prison you don’t leave. His determination to claw his way out of the downward spiral is tested when he stands up to defend a weaker boy, and the resulting recriminations only seem to reinforce the impossibility of escaping a hopeless future. Reese’s first-person narration rings with authenticity as he confronts the limits of his ability to describe his feelings, struggling to maintain faith in himself; Myers’ storytelling skills ensure that the messages he offers are never heavy-handed. The question of how to escape the cycle of violence and crime plaguing inner-city youth is treated with a resolution that suggests hope, but doesn’t guarantee it. A thoughtful book that could resonate with teens on a dangerous path. Grades 7-10. --Ian Chipman