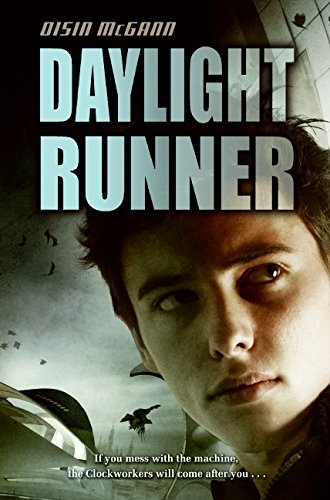 Asking questions in Ash Harbor can get you killed.

Sol Wheat is asking a lot of questions . . . especially after his father vanishes and is accused of murder.

Outside the huge domed city, an Ice Age has transformed Earth into an Arctic desert. But inside, the Machine, protected by the Clockworkers—a fearsome police organization—has become the source of the city's energy and a way for industrial leaders to wield enormous power. When a rogue organization begins posting messages warning of the Machine's impending failure, civil unrest grows.

As Sol begins to uncover the city's deepest secrets, the Clockworkers start targeting him. Now he's on the run in Ash Harbor's underground, where gangs rule and danger lurks in every corner. His life and the survival of Ash Harbor are both at risk.

In Oisín McGann's thrilling adventure, only the truth can help Sol Wheat escape the darkness.

Born in Dublin in 1973, Oisín McGann spent his childhood there and in Drogheda, County Louth. Art college ruined any chance he had of getting a real job, so when he left in 1992 he set himself up as a freelance illustrator. In 1998, he moved to London, and through no fault of his own, he ended up working in advertising as an art director and copywriter. After three and a half years, he began to fear for his immortal soul. He returned to Ireland in the summer of 2002 much as he had left—with no job, no home, and some meager savings.

Ever the optimist, he now works once more as an illustrator and mercenary artist by day and escapist writer by night.

Grade 10 Up—Sol Wheat lives in an apocalyptic future in which global warming has brought on an ice age that few people survived. His domed city of Ash Harbor is powered by "The Machine" and each citizen's life is arranged to keep it functioning. When Sol's father—who works outside to clear the dome of snow and ice—disappears after being accused of murdering a fellow "daylighter," the 16-year-old asks too many questions and finds himself on the run, wanted both by the police and the crime lord to whom his father is in debt. McGann has written a compelling tale reminiscent of Lois Lowry's The Giver (Houghton, 1993). Sol, like Jonas, strives to make his fellow citizens aware of the corruption and hypocrisy in their society and to challenge them to change for the better. Daylight Runner will appeal to science-fiction fans, although the length may deter reluctant readers or those looking for a fast-paced story. The author provides glimpses into Sol's past, and his character, though well developed and fully three-dimensional, is simply not likable enough to resonate with readers. When the plot drags in the middle third of the book, Sol's plight may not be compelling enough to ensure that most readers will continue to the end.—Leah J. Sparks, formerly at Bowie Public Library, MD
Copyright © Reed Business Information, a division of Reed Elsevier Inc. All rights reserved.